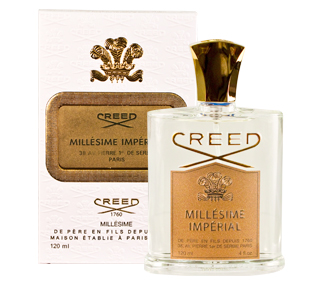 Millesime Imperial: A Show-Stopping Cologne From The House Of Creed

Millesime Imperial is a cologne by the luxury brand Creed, which was originally created to be used by a king, and then eventually released to the general public in 1995. Over the years, I have heard a lot of great things about this scent; Which is why, a few months ago, I finally decided to purchase it to try it and to bring you the following Creed Millesime Imperial review.

This cologne is a light and fresh scent for both women and men of any age group. This cologne makes you feel comfortable no matter what you are wearing. It’s a signature scent, so you can use it the entire year. It also evokes the lush landscape and citrus groves of a seaside palace in Sicily.

This fragrance can be worn on any occasion, from a corporate function to a night out on the town. It is considered by many to be the gold standard in fragrance, as it is extremely popular among the Royals, and it is often used by the world’s top entertainers in the movie and music industry as well. It is a perfect scent for those individuals who want to feel comfortable and top-notch at the same time.

The romantic and warm characteristics of Millesime Imperial by Creed are petals of soft flowers and crisp citrusy notes wafting on salty ocean breezes. This cologne seems to have the power to transport you immediately to another world; a world that is filled with both luxury and opulence.

The bottle itself is a piece of art, as it is famed for its golden look. The formulation and exquisite packaging of this cologne are manufactured in a location where there are only 30 workers, as the house of Creed likes to manufacture its goods with a small number of professional people who pay close attention to detail. It is definitely a show-stopping scent that can captivate just about any person. And since this scent is unisex, you can share this fragrance with anybody.

The top notes of this scent include crisp fruit and sea salt. The middle notes include Florentine Iris, mandarin, bergamot, and Sicilian Lemon. The base notes are musky, woody, with just a hint of the ocean. Millesime Imperial is classified as a marine, fresh, and citrusy scent.

This cologne also seems to be made for people of stature. It is truly a luxurious scent that makes you feel important and elegant. As soon as you spray it on your clothes, you will be able to walk into any room with much more confidence while carrying with you a one-of-a-kind scent.

The bottle that carries this formula fits perfectly with the Emmy, Grammy, Oscar, and Tony award shows. The brand Creed has been around the block since 1760; it has become well-known for presenting top-notch fragrances that make jaws drop.

Once you spray it on your clothes, the aroma will last you approximately 7 to 8-hours.

If you are thinking about purchasing a new fragrance that doesn’t contain many cons, Millesime Imperial Colognegne is an option that you should consider, as it is your best bet to feeling unique, flawless, and top-notch every single day.

The Successful Scent of Silver Mountain Water
Green Irish Tweed By Creed: A Cologne that is Adored by Women
Creed Aventus: A Magical Blend Male Scent By The House of Creed
Virgin Island Water By Creed Review – Unisex Fragrance