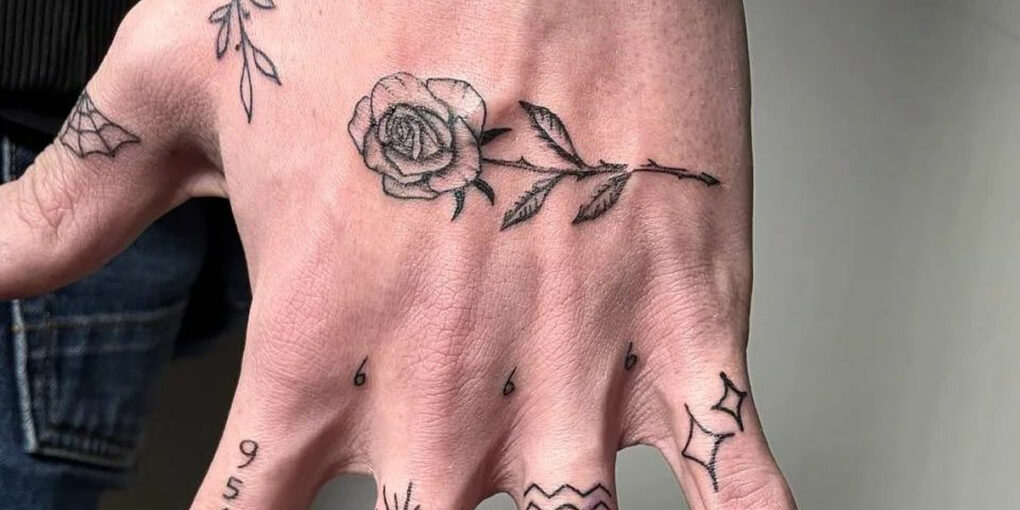 Men, have you ever considered a hand tattoo? While you’re likely going to be drawn to having a tattoo inked on your arms, chest or back, hand tattoos are becoming more and more popular as a place to show off some artistic ink.

You only need to take a look at Harry Styles, Pete Davidson and David Beckham to start getting an idea of how cool hand tattoos can look. In our opinion, hand tattoos on men will look better if there are already some other tattoos on the forearm, as they can help to minimise the visual impact and in many ways, a hand tattoo can act as an extension of other designs you have on your arms.

Naturally, when getting a tattoo on your hand, you have less space to work with compared to your chest or back, for example, so you need to think carefully about what design or designs you can realistically get inked onto the skin.

What does a hand tattoo mean?

As with pretty much any tattoo, having a tattoo specifically placed on your hand doesn’t tend to have any real meaning. However, some tattoo die-hards have suggested which hand you choose for your tattoo could have some significance.

For example, it’s claimed the right hand can be associated with dominance, mercy and logic. The left hand, meanwhile, is said to be associated with emotion, the moon and justice. Whether you want to agree with these meanings or not, is entirely down to personal preference.

If you’re thinking of getting a hand tattoo but need some inspiration, then we’ve rounded up some of the coolest and most unique hand tattoo ideas for men. Just remember, even though tattoo removal technology continues to improve, your tattoo is, in theory, for life, so make sure you’re going to continue to love your new hand tattoo as you get older.
1/10

A skeleton hand tattoo has proven to be a popular idea for men, partly due to the numerous ways in which you can have one depicted on your hand. You could, in the case of the image above, opt for just a skull, as the shape of a head fits rather neatly onto the top of your hand. Other skeleton hand tattoo ideas could see an entire skeleton being drawn on, or you could decide to have finger bones tattooed over the top of your fingers (more on that below). 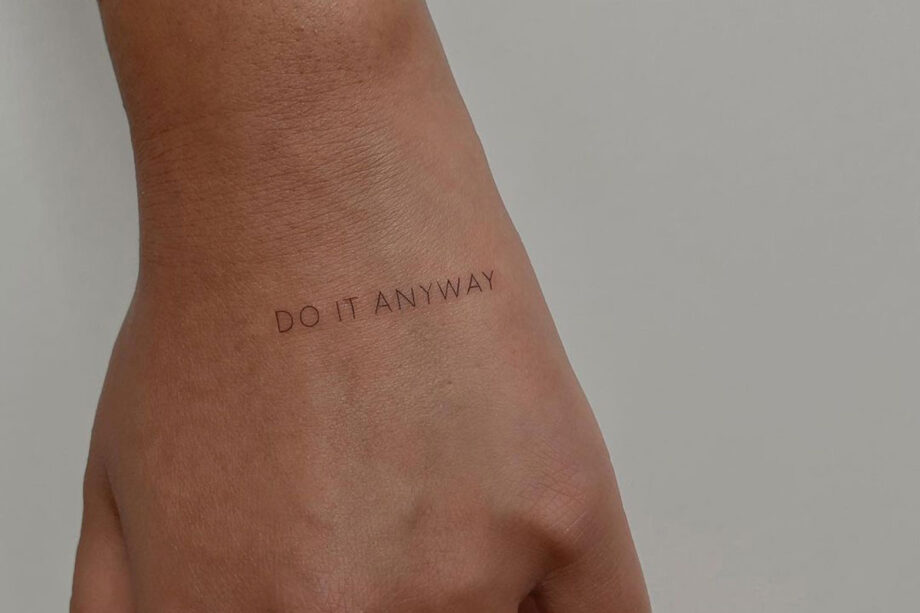 Of course, if it’s your first hand tattoo, then going for something a bit more simple could be the wisest decision. As is the case with the image above, this could be a simple line of text, whether it be a quote or even a birth year (your own or one of your family members, perhaps?). Other simple hand tattoo ideas could include a small star, a wave, or just anything else that will realistically look good when drawn small. 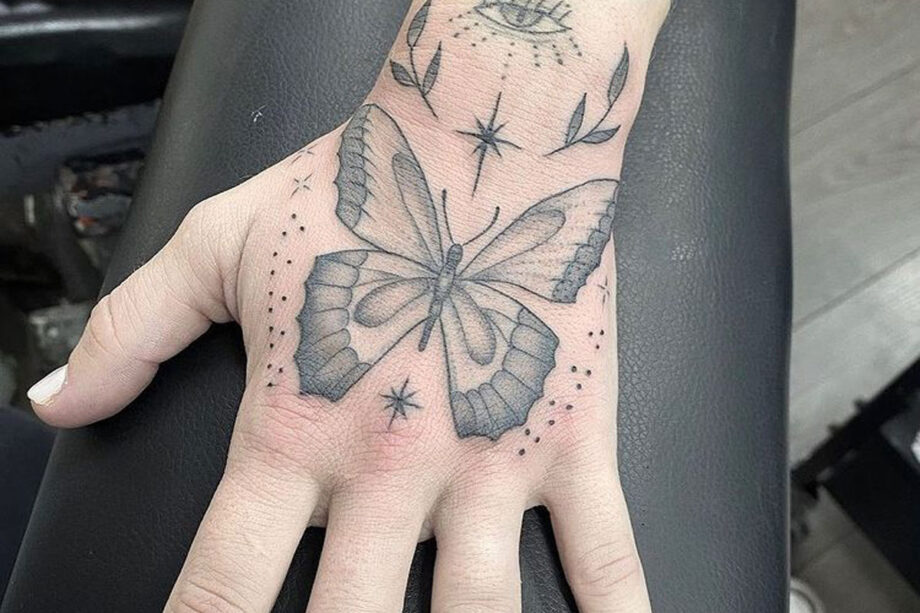 A butterfly is another popular hand tattoo idea for men. As with some other hand tattoo ideas, you have plenty of freedom of choice when it comes to deciding how you want your butterfly to look. You could opt for one butterfly taking up your entire hand surface, or you could have a number of smaller butterflies looking as if they’re flying across your skin. Butterfly tattoos are said to symbolise freedom, soul, love, grace, transformation, and rebirth. But, you know, you might just butterflies. 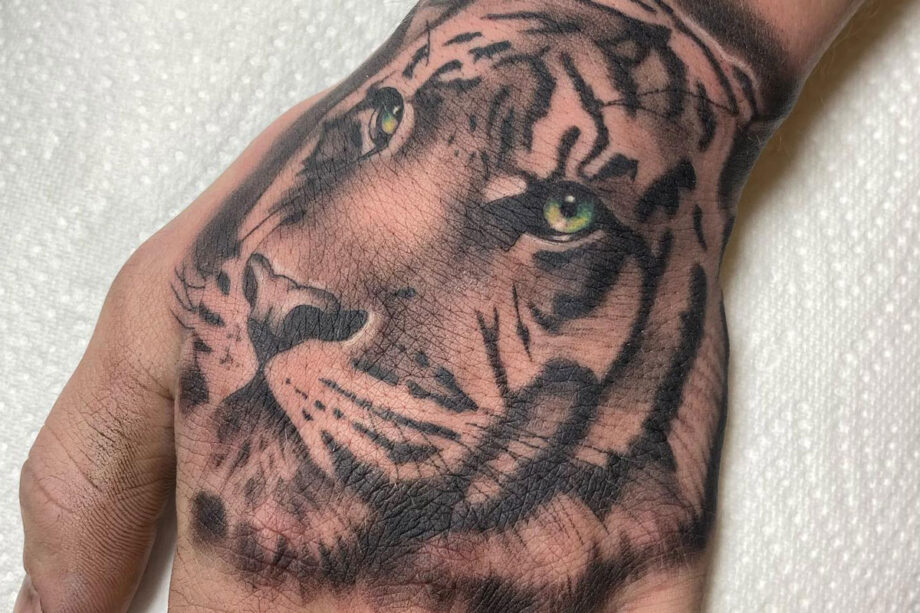 Tigers have also appeared to be a popular hand tattoo idea for men, with the ferocious cat often being associated with strength, good luck, wisdom and prosperity. A tiger tattoo is also a perfect candidate for being finished in black ink only, with perhaps just a pop of colour in the eyes to help them stand out. As is the case with the image above, a tiger head fits oh-so perfectly on the hand, making it a great hand tattoo idea. 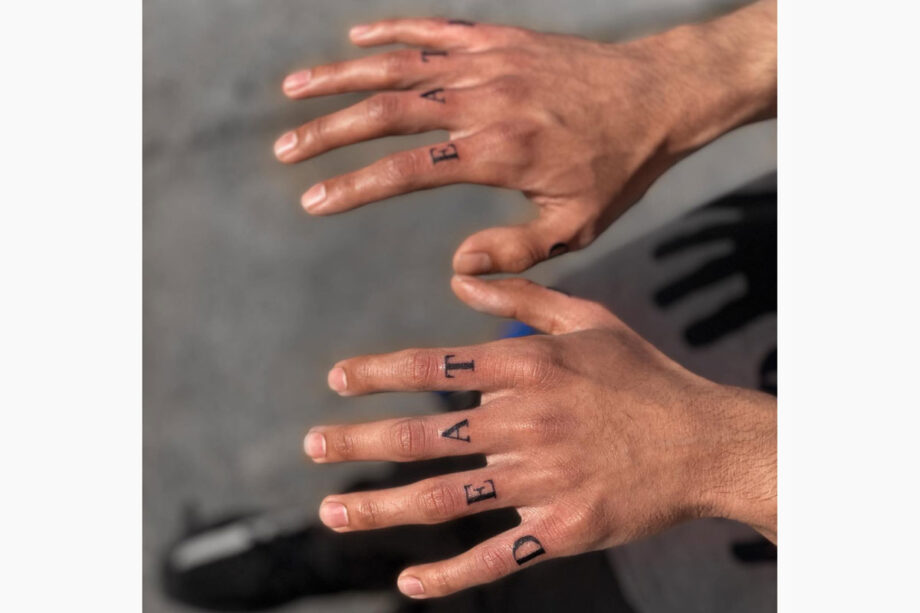 If you don’t want to interfere with the main surface of the hand, one popular tattoo idea men choose is to have lettering across their fingers. A classic example of this would be to have the words ‘THUG’ and ‘LIFE’ emblazoned on your fingers, or as the case with the image above, ‘DEATH’ and ‘EATER’. Now, we’re not suggesting you too get something as morbid, it’s purely for illustrative purposes. How about, ‘LOVE’, ‘LIFE’? Much more positive. 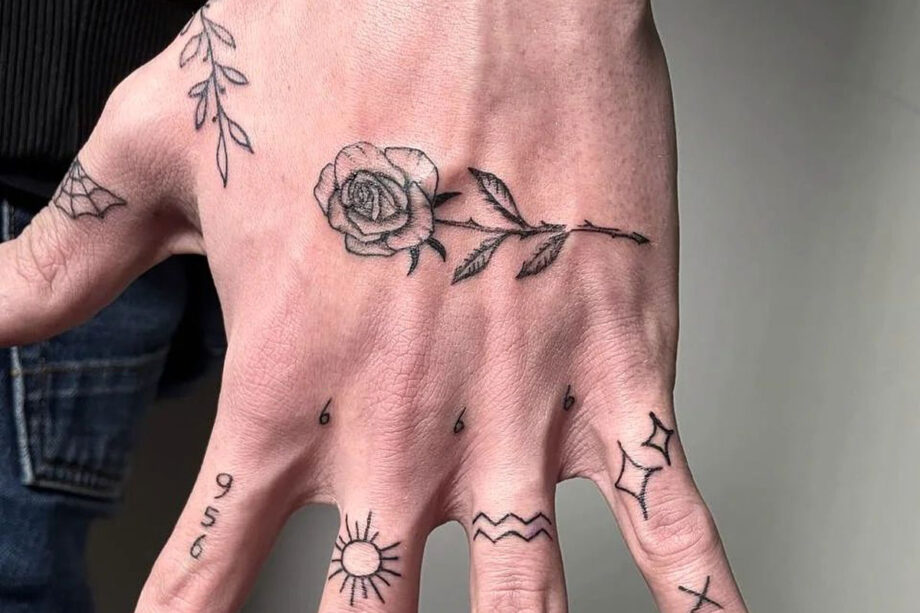 A rose is perhaps one of the most common tattoos men get, as they’re incredibly simple, can have great meaning and look great no matter where you get them inked on your body. We love the example of a rose hand tattoo above. Incredibly realistic, doesn’t take up too much space, it looks great in combination with the customer’s other finger tattoos and, to be honest, we just think it looks damn cool. A rose tattoo, as should be obvious, represents love (or death), but as we’ve already said, it’s a super simple tattoo idea that suits anyone. 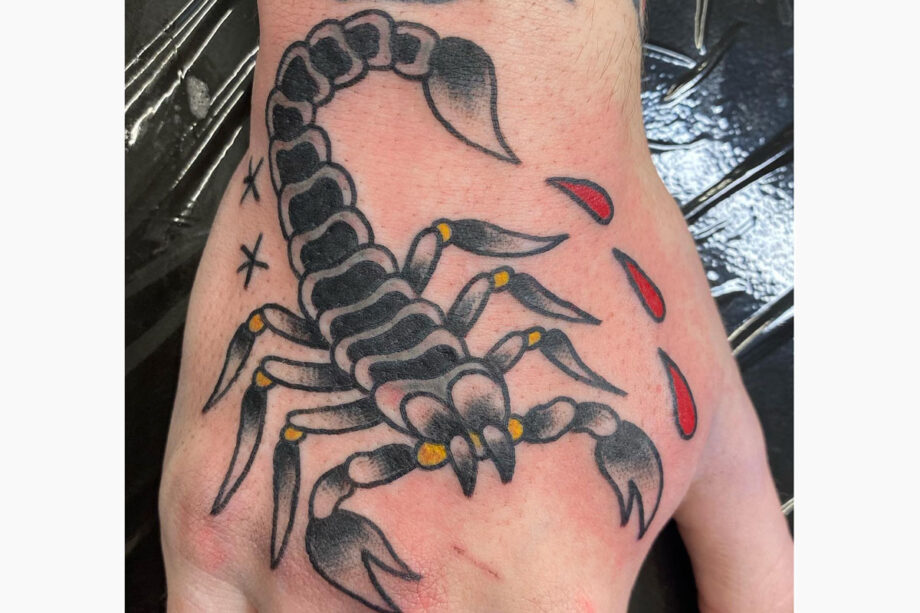 Maybe a slightly more obscure choice as a hand tattoo option, but some men choose to get a scorpion inked on the end of their arms. Scorpion tattoos are said to represent intimidation, fear, protection and apparently, powerful sexuality. We’re not entirely sure if we agree with that last one, but hey, all tattoos are personal, so you can make your scorpion mean whatever you want. 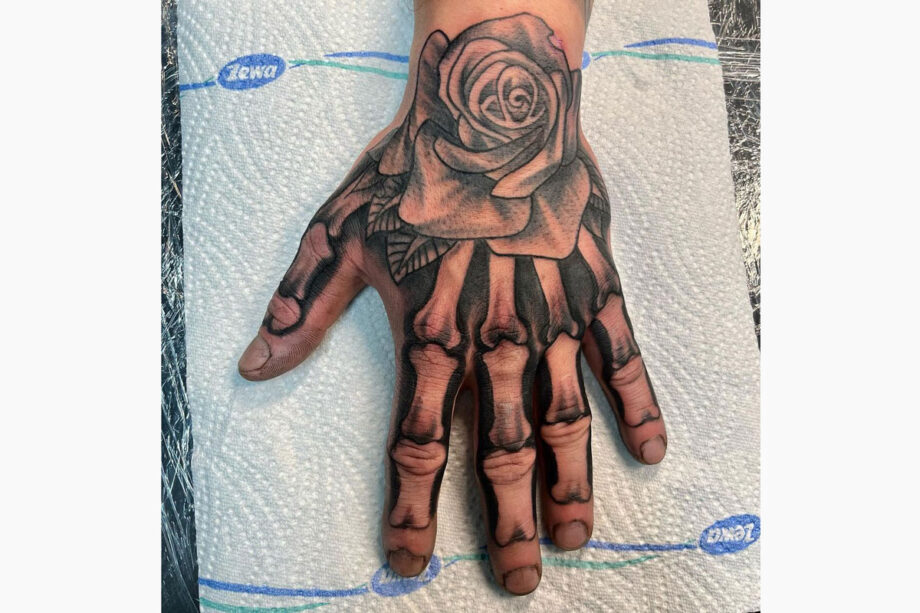 As we mentioned earlier, a cool variation of a skeleton tattoo is to get some bones tattooed on your hand, over your fingers. The obvious illusion here is to make it seem as though you’re looking through your own skin to your hand below. It’s clever and interesting, although we have to say, the thick lines of the example above aren’t our exact cup of tea. If it was done in more of a fine line aesthetic though, we could be convinced. Each to their own. 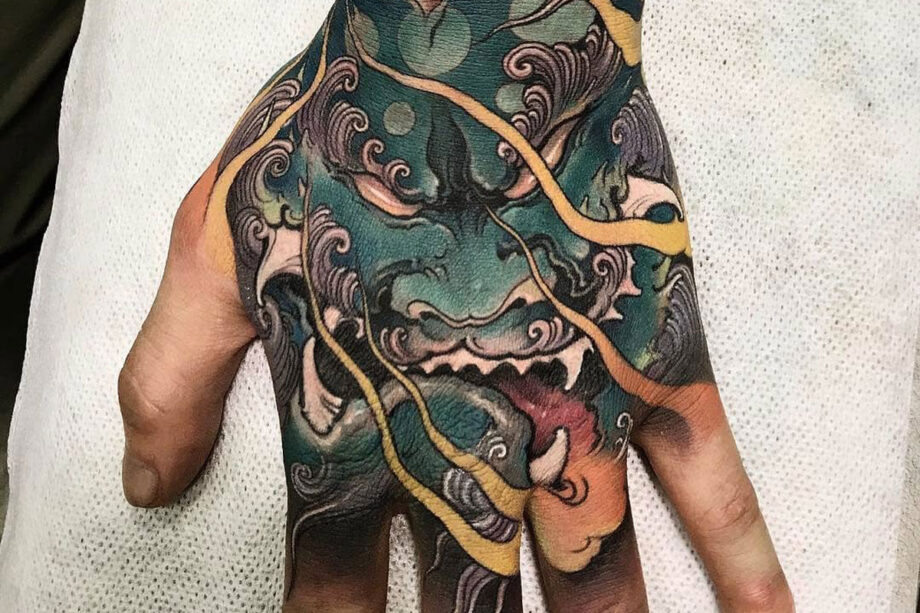 If you like your tattoos to be big, bold and colourful, then a Japanese hand tattoo will be right up your alley. Japanese tattoos have a rich and storied history, dating back some 5,000 years. Way back then, tattoos were given to criminals as a form of punishment, and in the 1800s, it was even banned from the country. This didn’t stop artists, however, who were willing to practice the now illegal form of art.

Traditional creatures to be used in Japanese tattoos include dragons, koi fish, a Fu Dog (a guardian lion) or a Hannya mask. 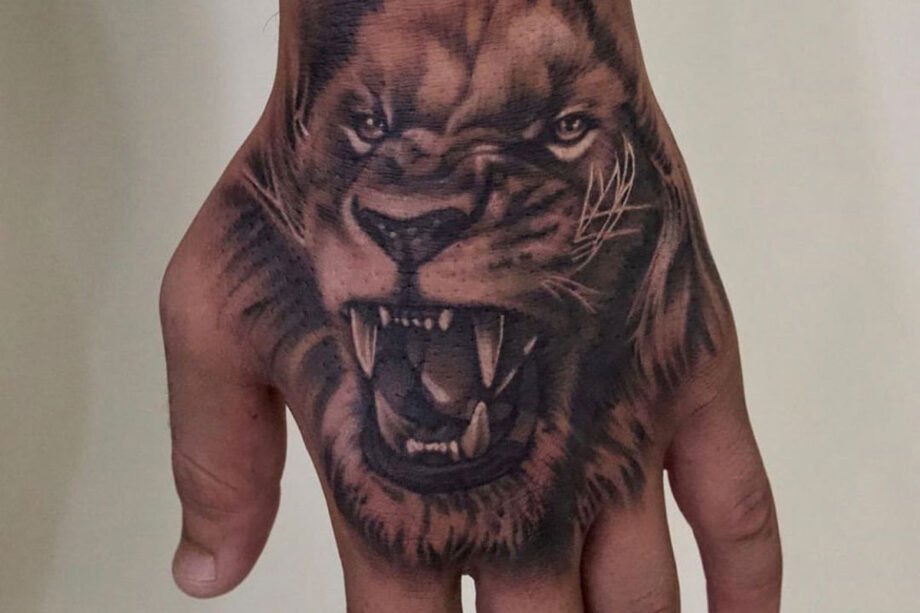 If you like big cats but don’t fancy a tiger, then the next obvious option is to get a lion hand tattoo. Lion tattoos have long been associated with strength, courage and bravery, so if these sound like words you’d use to describe yourself, then get yourself down to a tattoo studio post haste and book yourself in.