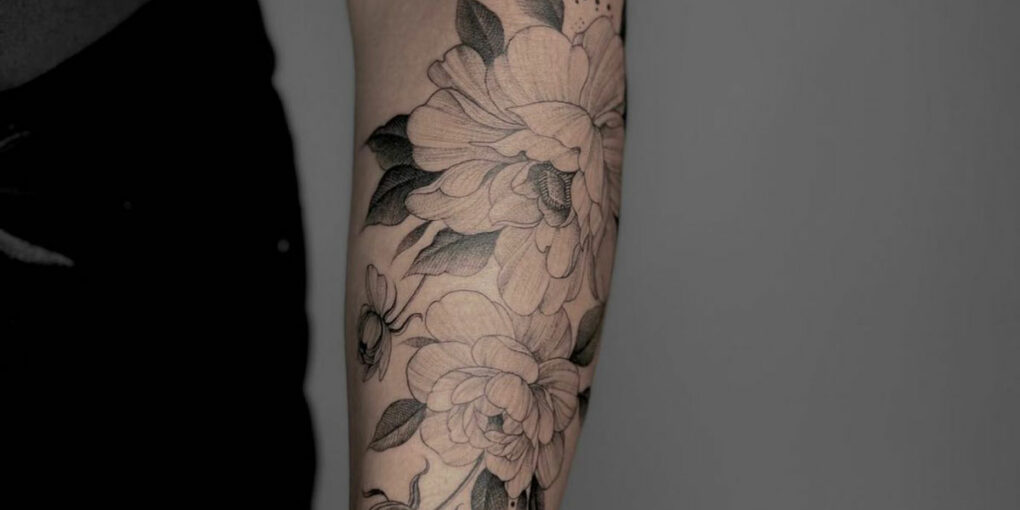 It’s with this in mind that you need to think carefully about what forearm tattoo you get, as you don’t necessarily want to have something offensive tattooed onto you, for all the world to see. Some good tattoo options for your forearm are going to be ones that you really want to show off, perhaps tattoos that have significant meaning to you.

If you’re a little stuck on forearm tattoo ideas, then take a look at the gallery below. We’ve put together a comprehensive list of just some of the tattoos that look great on your forearm, to help give you some inspiration.

A small forearm tattoo is one of the best options for men to get if it’s your first foray into the world of tattoos, or if you already have other tattoos on the forearm and just want to fill in some space. Fine line tattoos, such as the one in this image, work well for forearms, as they can be seen clearly, but aren’t so ‘in your face’ as something with a lot of colours. 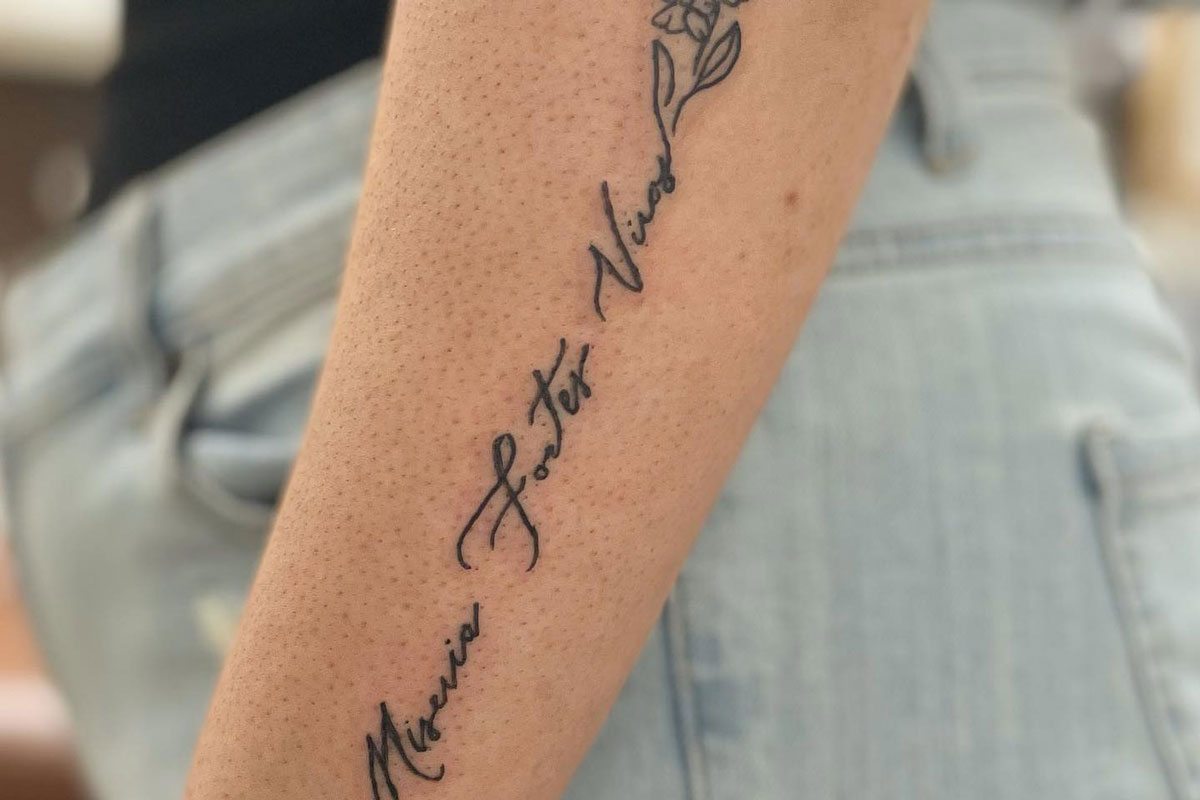 If you want a forearm tattoo that is a little more simple, how about some wording? Men wanting a simple forearm tattoo aren’t necessarily limited in terms of size, as you have your whole forearm area to play with. You could also opt for a line drawn around the entire circumference of your forearm, perhaps in various thicknesses. 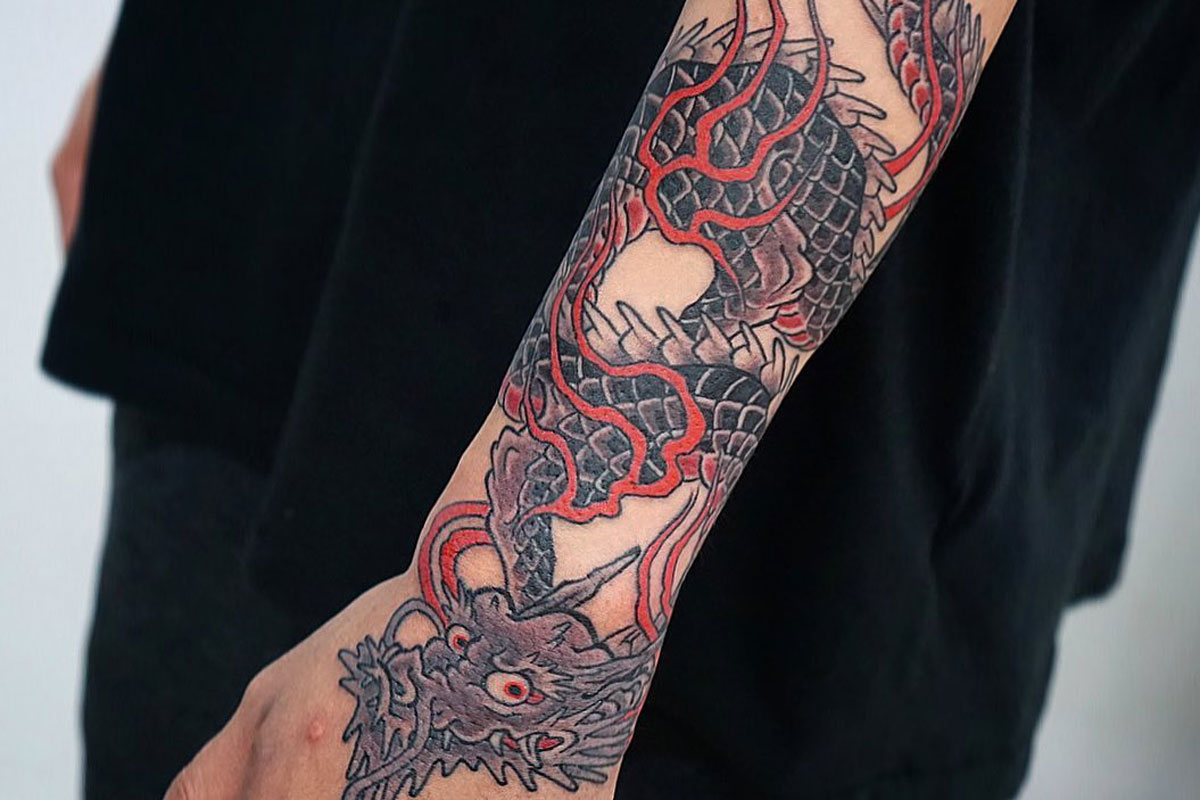 As we mentioned earlier, men have the entire forearm area to use as a canvas and so getting a tattoo on the outer forearm still leaves space on the inner forearm to get any other ink you wish in the future. A snake or dragon, as seen in this image, is a great forearm tattoo idea for men, as it follows the natural movement of the forearm, including where the muscle is. Floral work is also particularly effective. 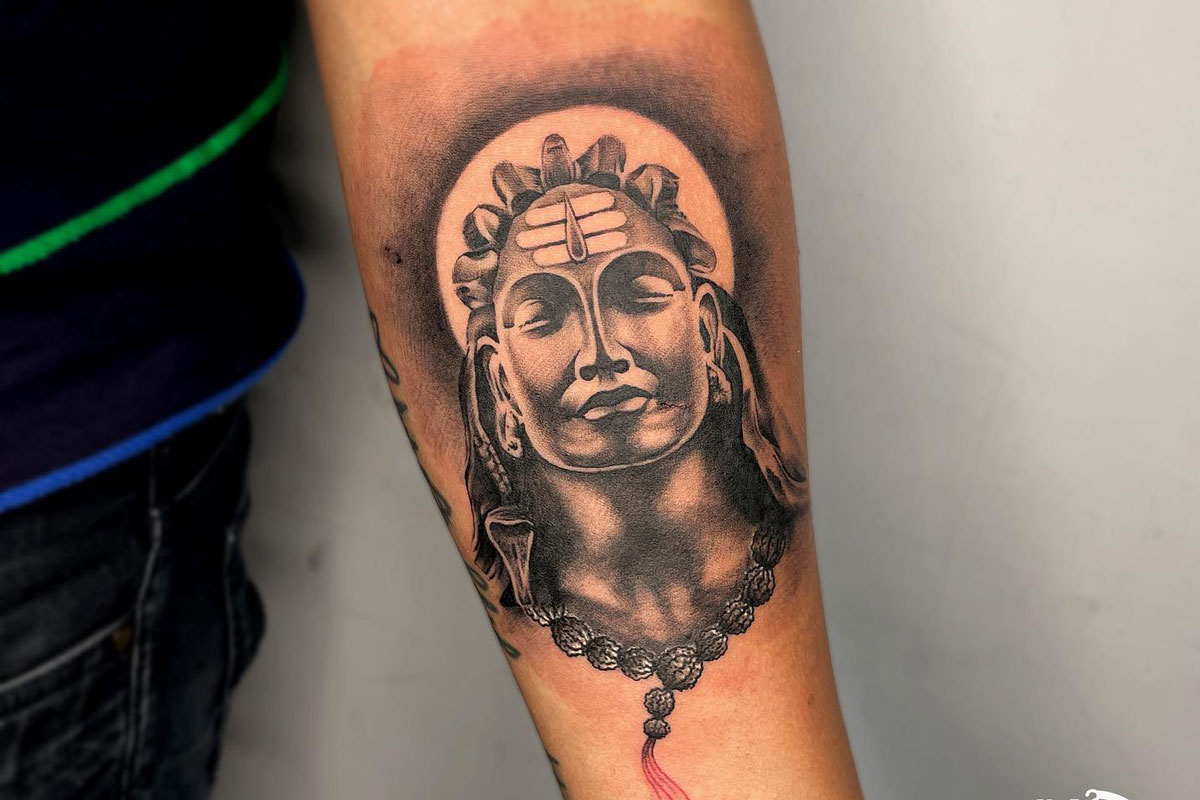 Space on the outer forearm taken up? Turn your arm over and you have more space. Inner forearm tattoos are a great place to have something significant inked onto you, as they can be held close to the body. Alternatively, it’s also a space to place something particularly artistic, as it’s an area that others are going to see incredibly easily. 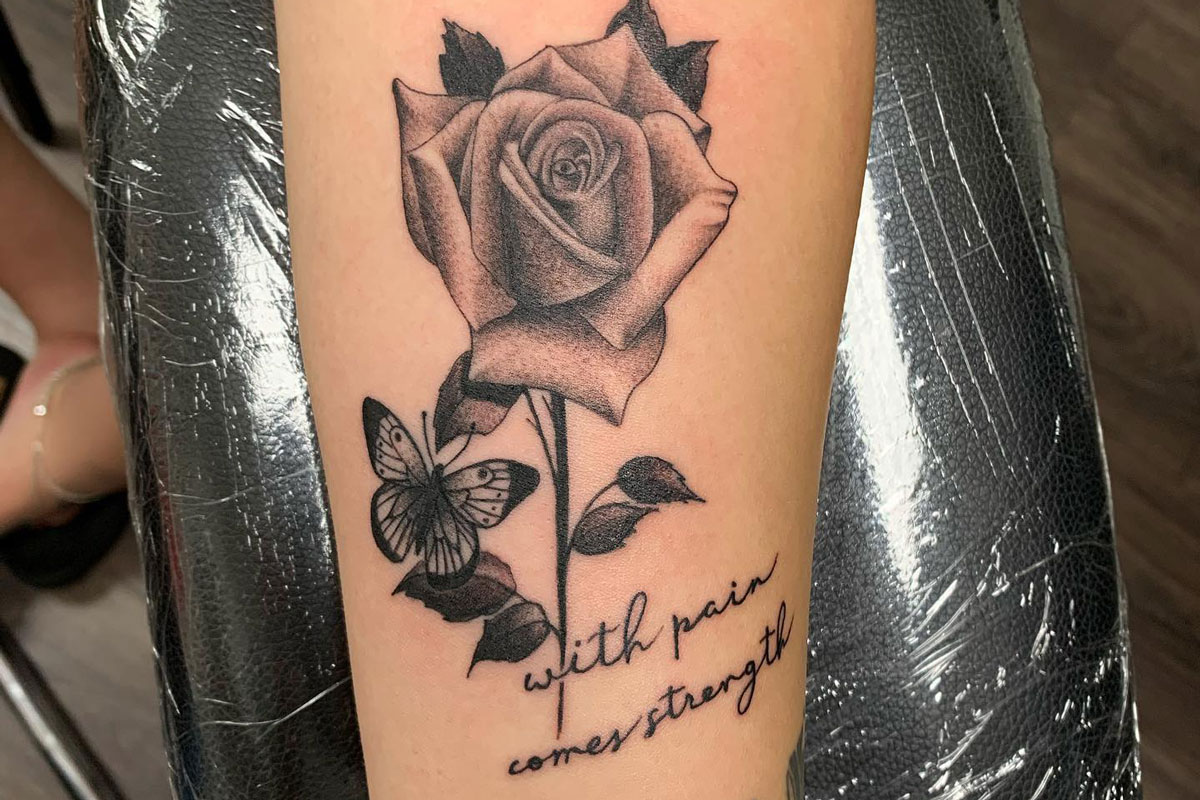 Roses are an incredibly popular tattoo option for men and can be placed anywhere on the body, but they can look particularly great on the forearm. Rose tattoos, perhaps unsurprisingly, are said to signify love and passion. So, if you love yourself, get a rose tattoo on your forearm! 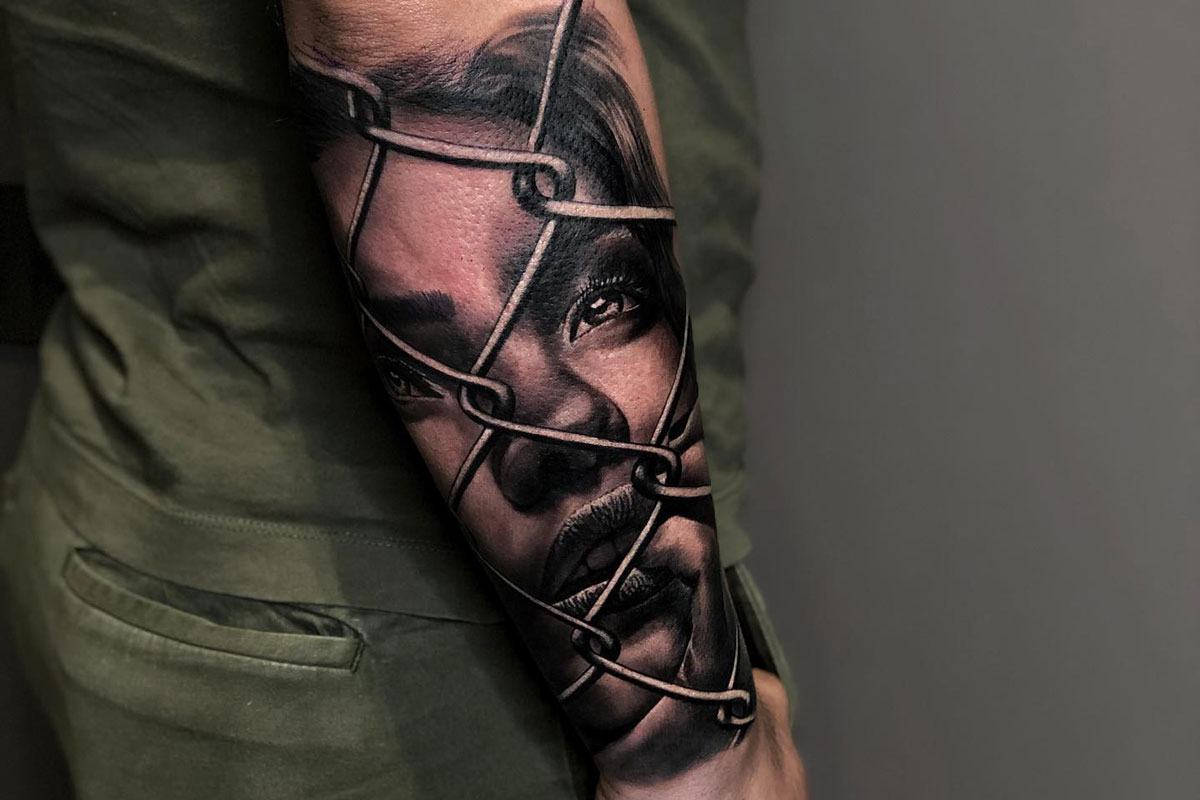 With such a large amount of space on your forearm, men may want to consider getting a full quarter sleeve tattoo to take advantage of it. Admittedly, quarter sleeve tattoos aren’t going to be to everyone’s taste (they’re for life, remember?). But by using all of the space available, you can either choose to have one large, incredibly detailed tattoo to form a sleeve, or several smaller tattoos joined together. 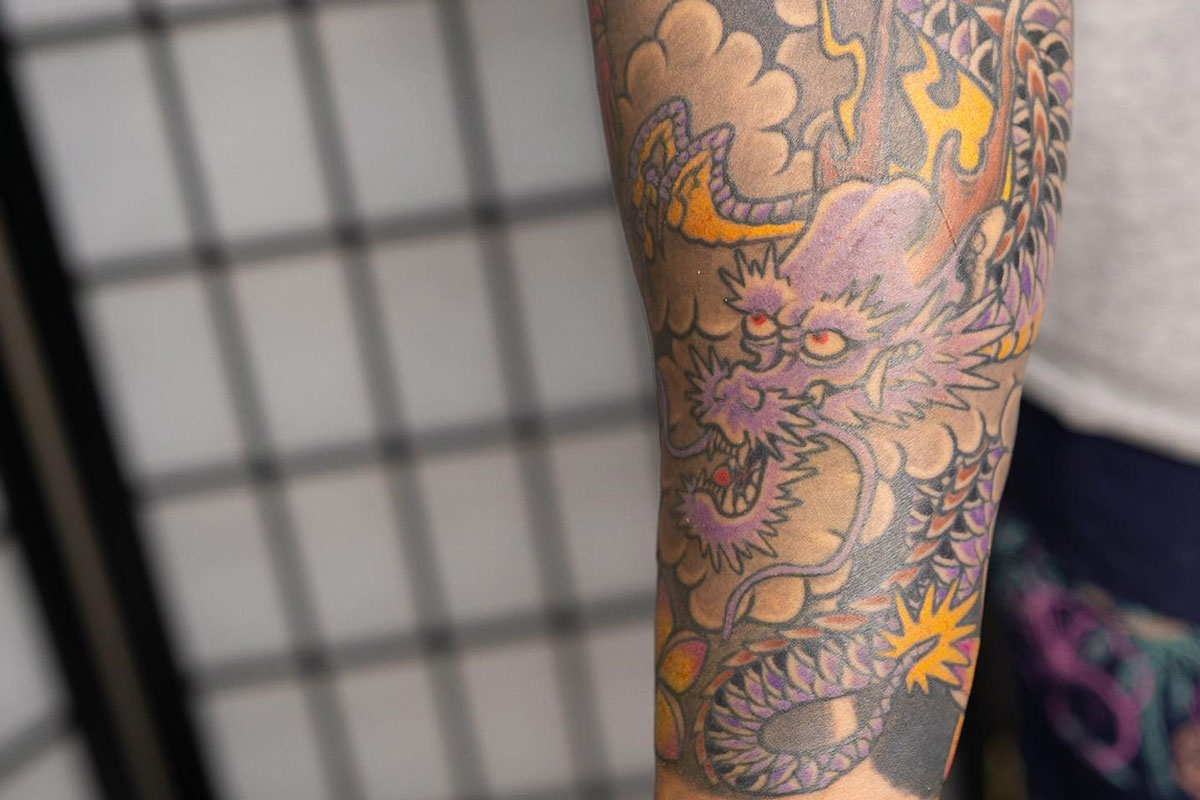 Japanese tattoos are incredibly distinct in their appearance, and usually include images of Koi fish, dragons, snakes, tigers and geishas. Traditional Japanese tattoos – also known as Irezumi – are applied by hand, with a needle attached to a bamboo pole. However, in modern times, tattoo artists using conventional tattoo guns have been able to master the style. If you get a Japanese forearm tattoo then it’s likely you either already have other Japanese tattoos, or you plan to in the future. 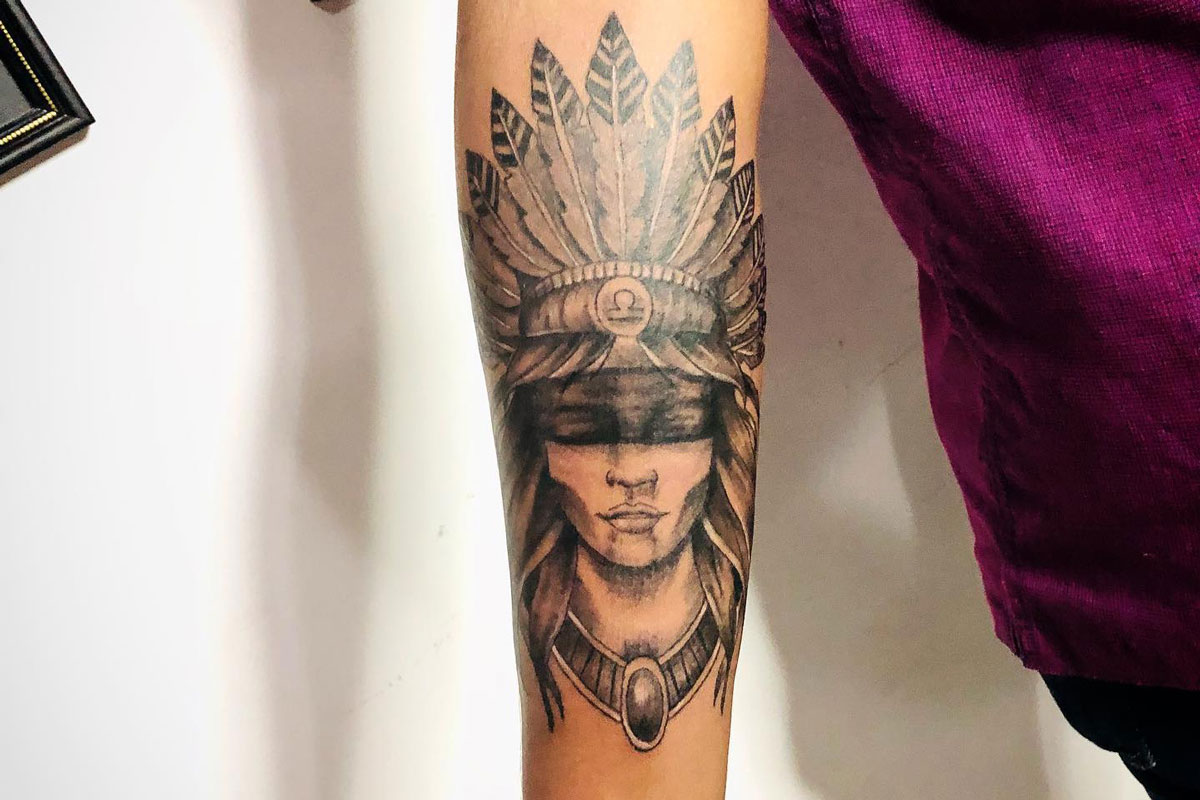 Some men choose to get Native American figures tattooed on their forearms. How come? Well, tradition states that Native American tattoos signify protection and healing. They can also be used to signify status and accomplishment, so could be a good tattoo option for men who are particularly successful in life. 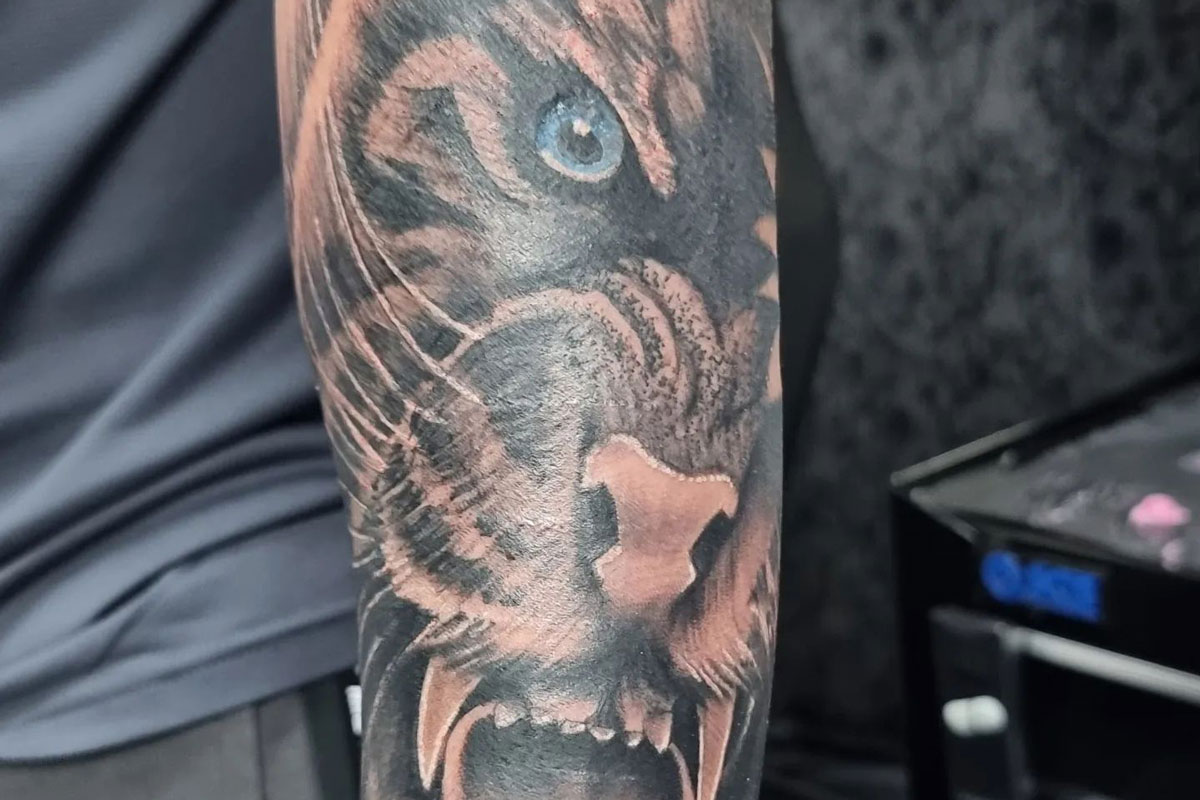 Tigers are another popular tattoo idea for men. Symbolising raw power and strength, a tiger tattoo on the forearm could be a good option for men who are regulars at the gym. As this particular example of a tiger forearm tattoo shows, the sheer amount of space available can mean your tattoo artist can make the tiger incredibly detailed. 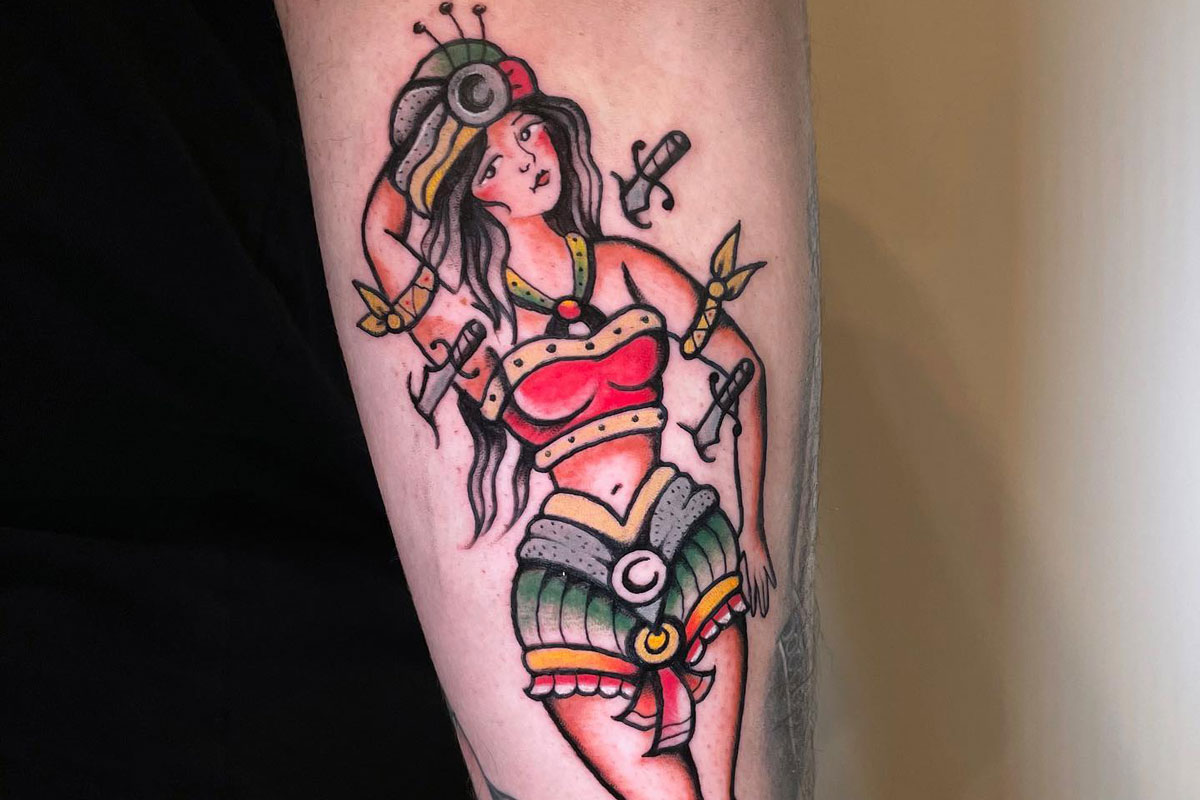 Anyone who knows tattoos will know the name, Sailor Jerry. A prominent American tattoo artist who lived until 1972, he was known for his distinctive style of tattooing. This forearm tattoo is a perfect example of the Sailor Jerry style (despite his name, Jerry didn’t just tattoo images associated with sailing). If you’ve already got a few Sailor Jerry-style tattoos on your body, then adding an extra one to your forearm is a no-brainer. 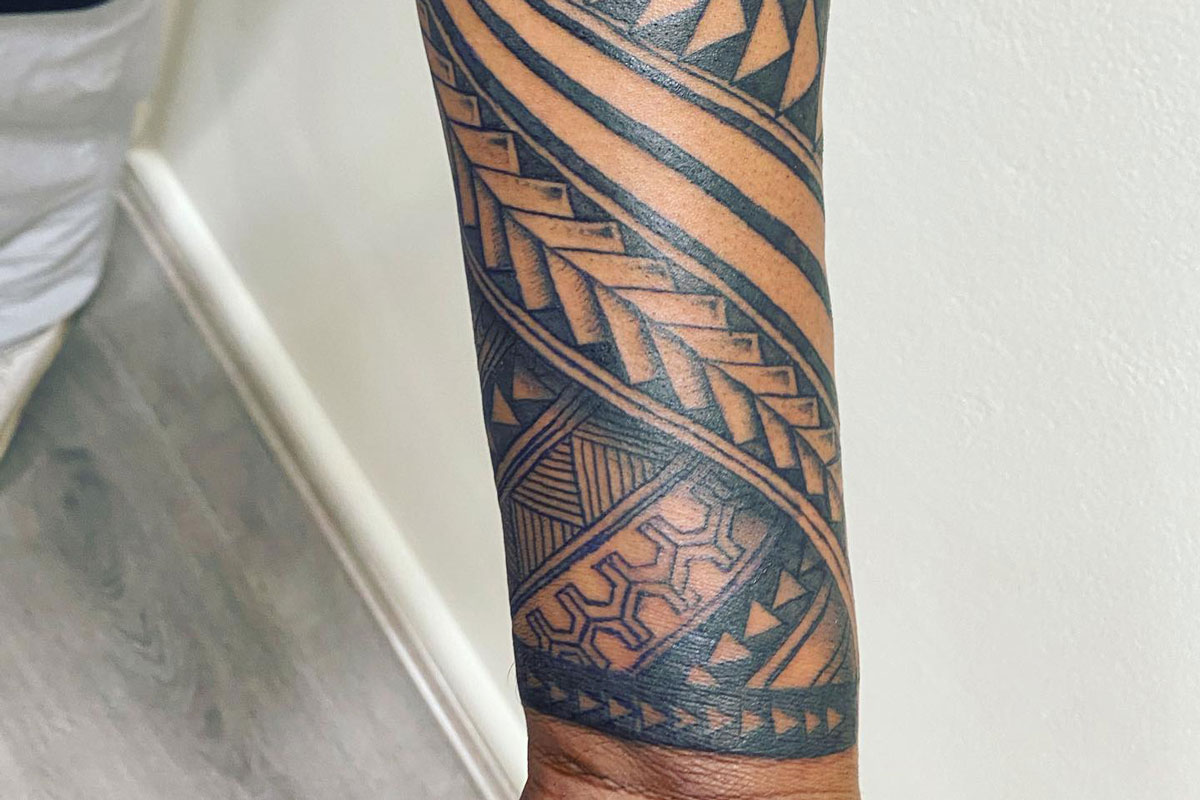 Tribal tattoos are associated with specific cultures, although that hasn’t stopped them from being adopted by more of a mainstream audience. Symbolising power, protection and strength, a tribal tattoo consists of intricate line detailing and shading, resulting in a tattoo completely unique to the owner. 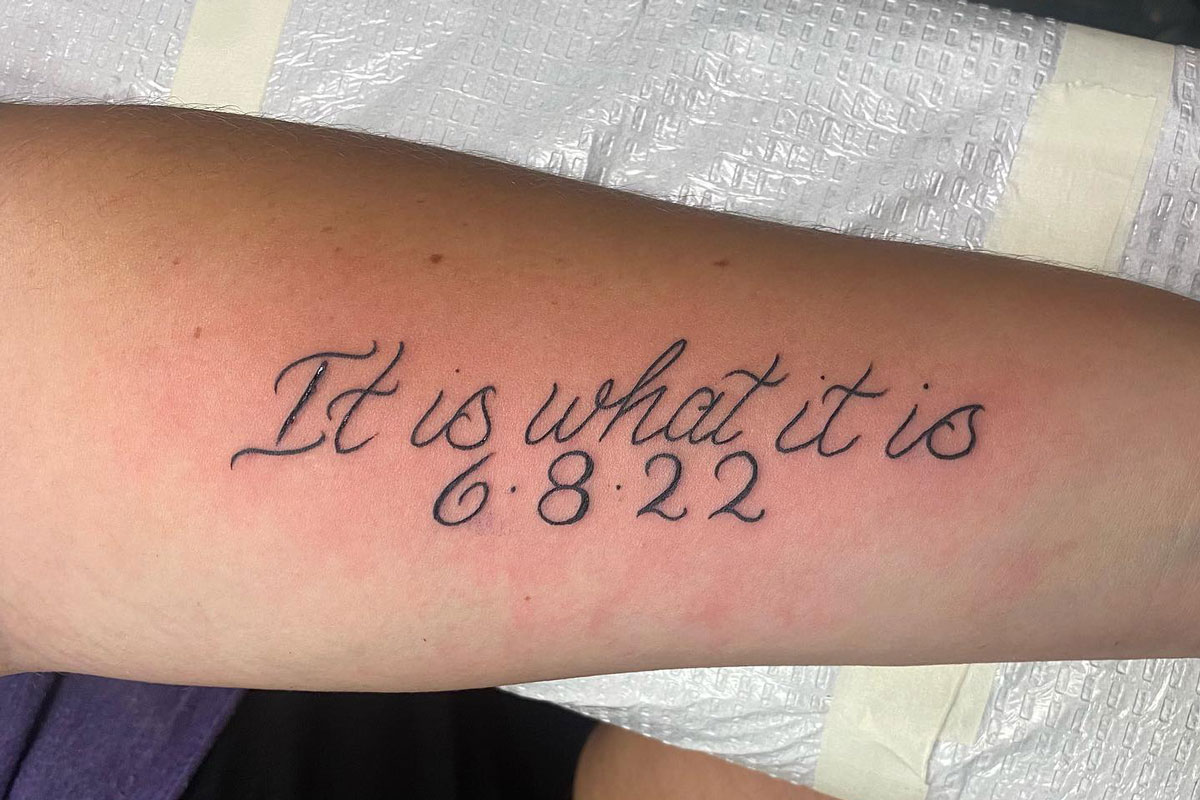 Famous quotes are a popular tattoo for men, as you may have a few words of affirmation or something said by a celebrity that you hold particularly close to your heart. By having this quote tattooed on your forearm, you can always glance down to give it a read and remind yourself of how you want to live your life if things begin to get tough. 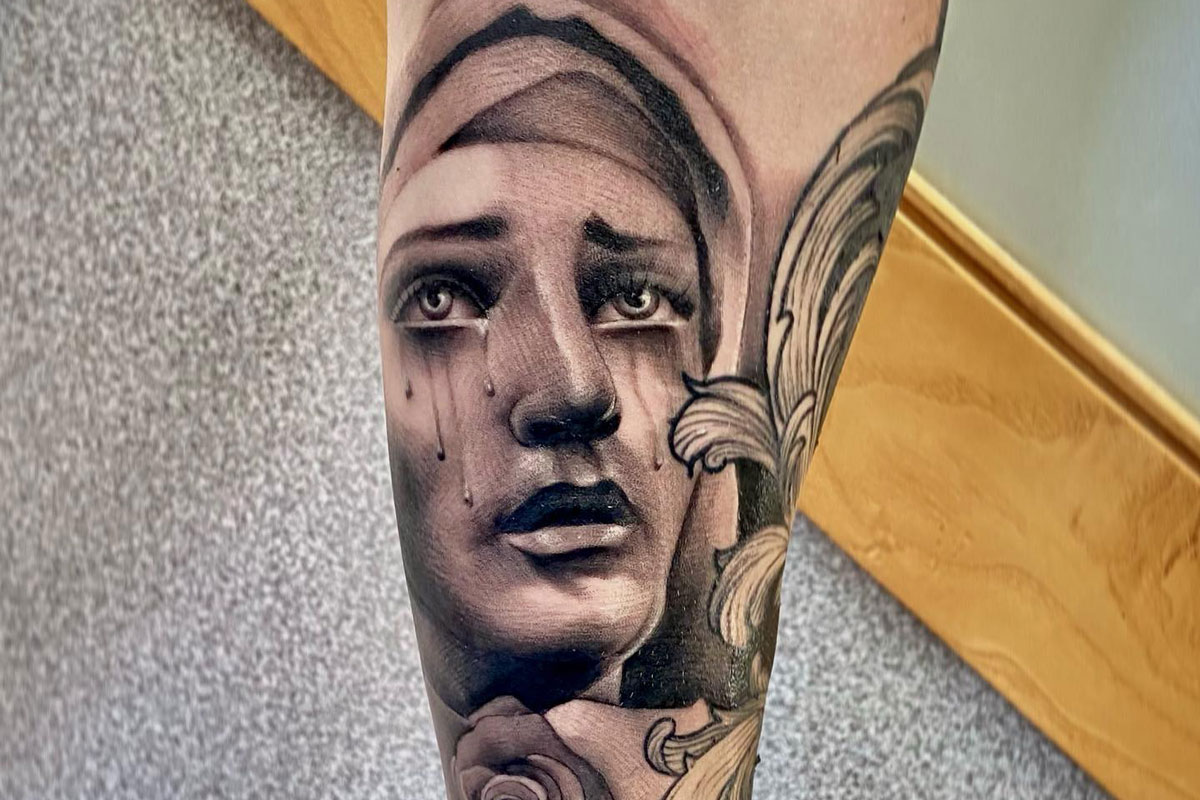 If you’re a man of faith, getting a religious tattoo on your forearm is your chance to express what you believe in. It doesn’t necessarily have to be a religious figure that everyone will immediately recognise, but just something that holds particular meaning for you. 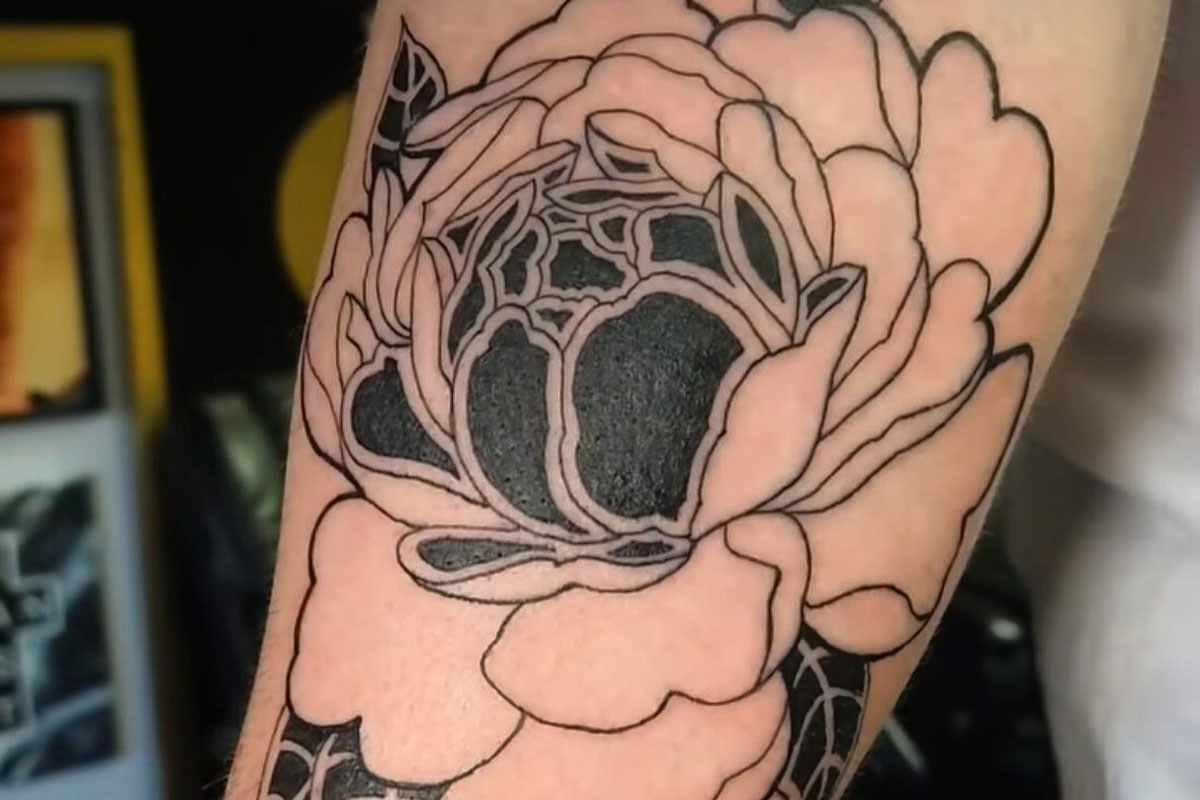 If you like floral tattoos but don’t want to get a rose, then you still have a huge choice of flowers to choose from. The flower or flowers you get tattooed on your forearm can be big or small, be black or have some colour. Flower forearm tattoos don’t necessarily have to have meaning, although you could the favourite flowers of a loved one, for example. Ancient cultures say flowers are a direct symbol of God’s contentment. 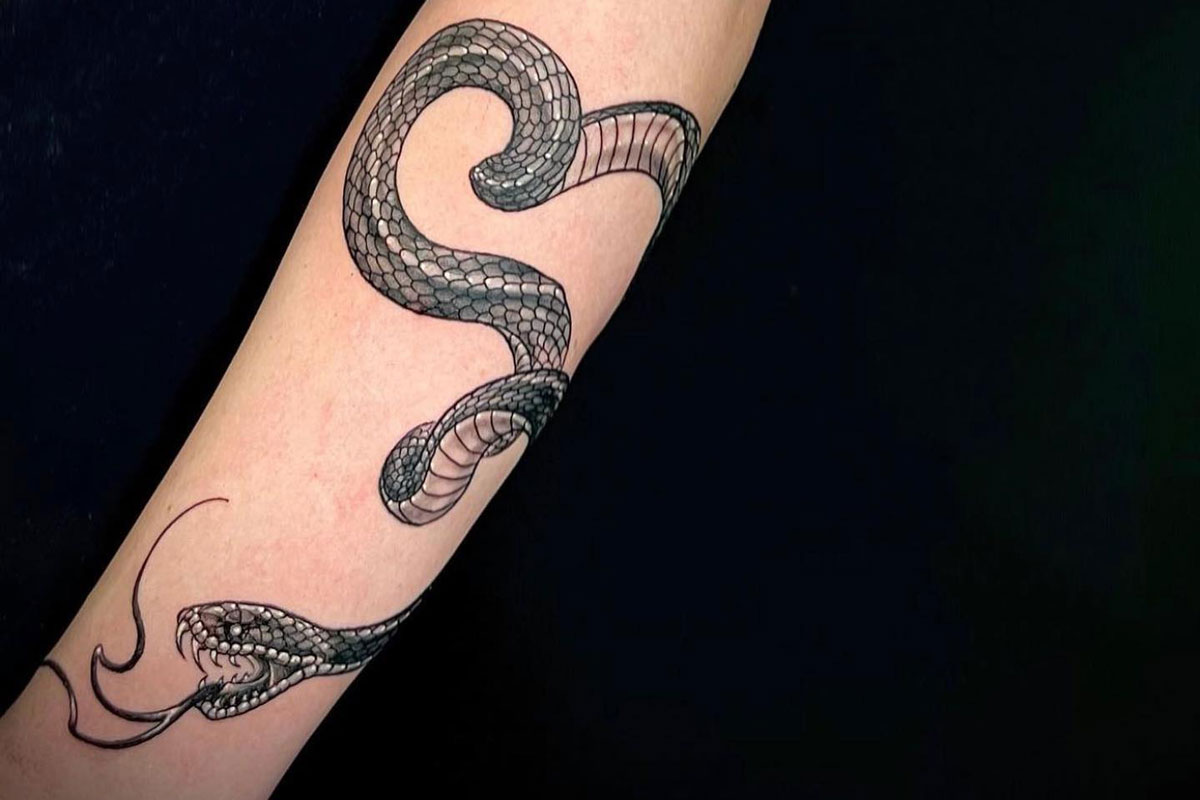 A snake forearm tattoo can take full advantage of the space on offer by swirling its way around the forearm and up into the upper arm, as seen in this example. Said to symbolise rebirth and transformation, owing to the fact snakes shed their skin, a snake forearm tattoo is a great option for men wanting to make a change in their life.

Check out our full guide for snake tattoo ideas for more inspiration. 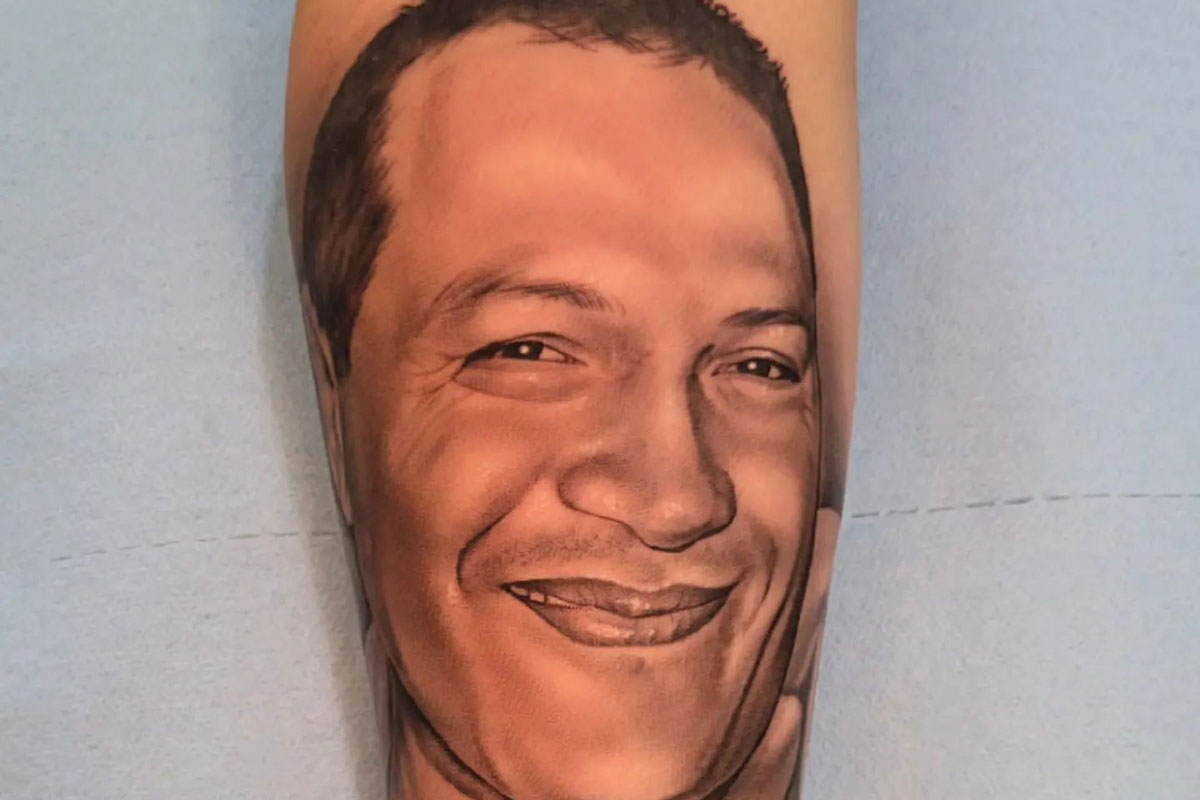 Portraits are another popular tattoo option for men. Again, the forearm is a great placement option for men who want to keep that person close to them and to show them off, as opposed to having one inked on their chest, for example. It doesn’t have to be a portrait of someone you know, it could well be a celebrity. Australian tennis player Nick Kyrgios, for example, has portraits of Kobe Bryant and LeBron James tattooed on his arm, due to his love of basketball. 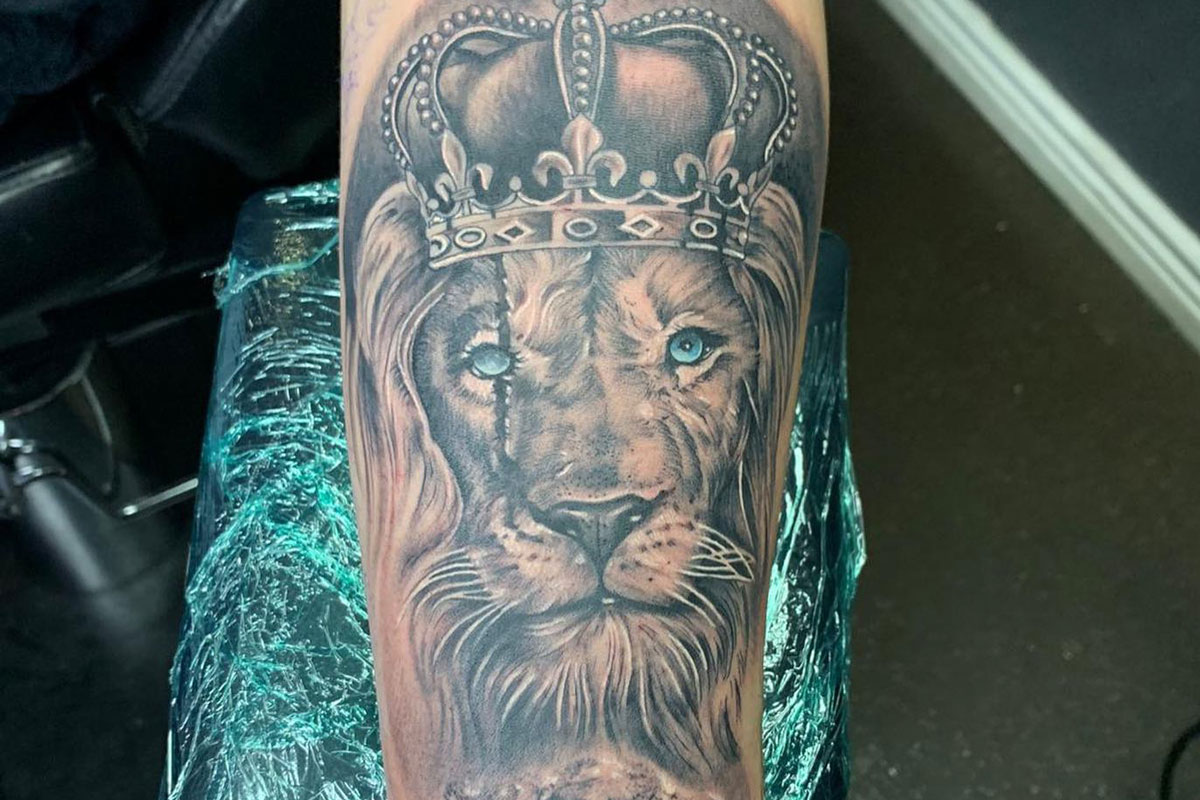 A lion forearm tattoo is a great symbol of courage and strength, making it a popular forearm tattoo idea for men. Getting a lion tattoo on your forearm is a perfect place to show off said courage. The majority of lion forearm tattoos will be completed in black ink, but if you want to inject some colour, then you can do so in the eyes, as seen in this image example. 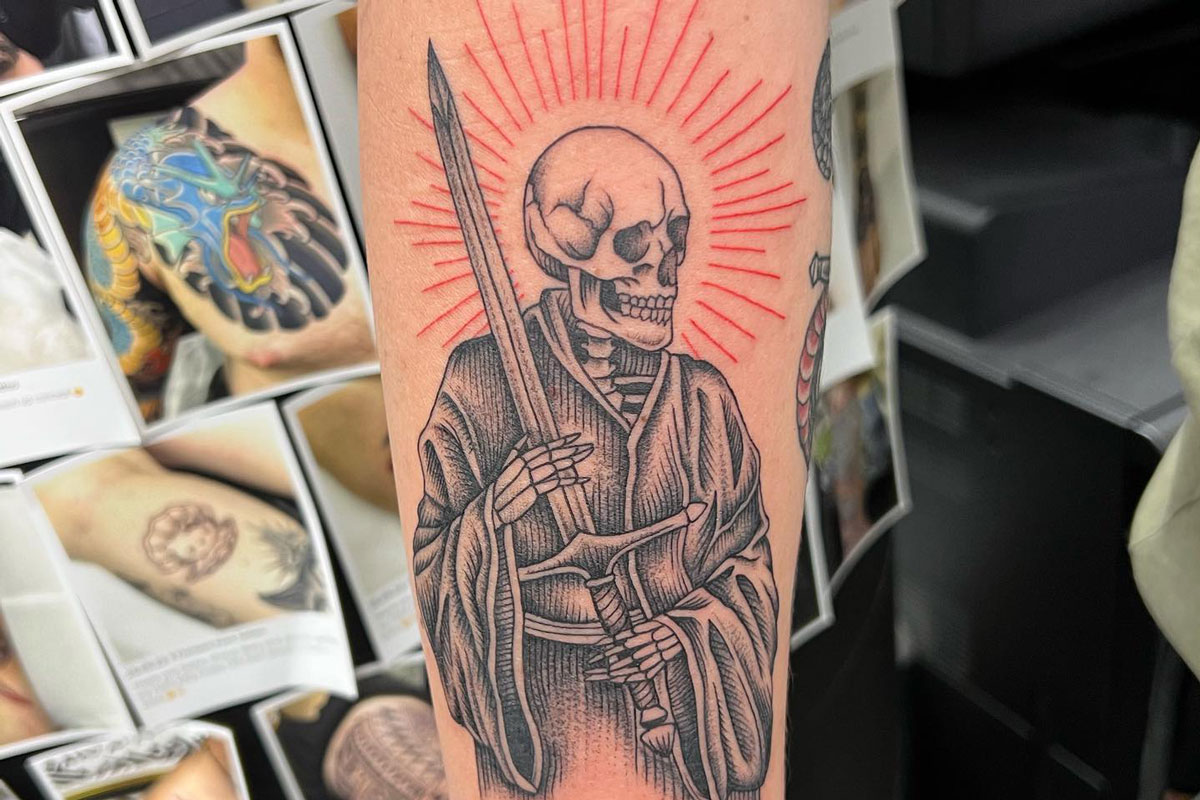 It should go without saying that skull tattoos symbolise death and the afterlife, although some skull tattoo owners also claim they can represent the afterlife or rebellion. Skull forearm tattoos can come in a range of styles and sizes, whether it be a standalone skull, a skull and crossbones or something a little more imaginative such as the one seen in this image. 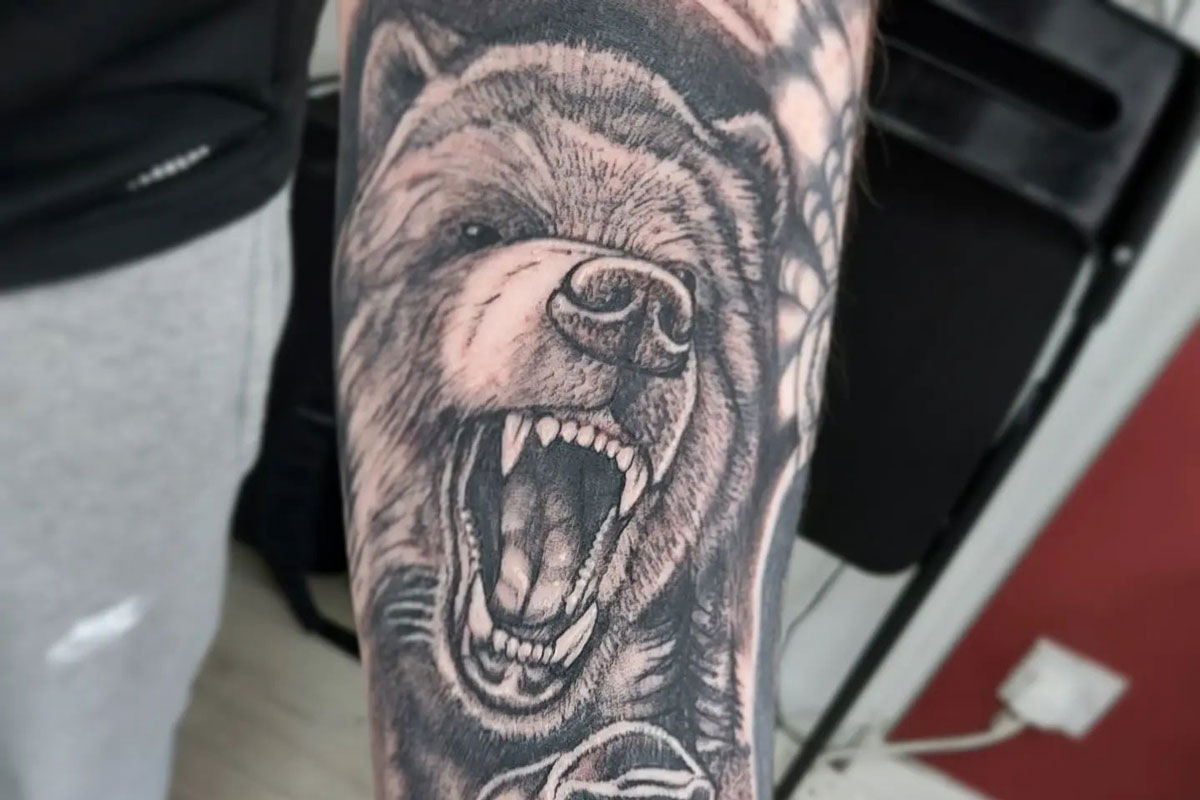 A bear tattoo, like a lion, is another symbol of strength and courage – which could explain why Justin Bieber has both a bear and a lion tattooed on his chest – making them an excellent tattoo idea for men to place on their forearm. You have multiple choices when it comes to a bear forearm tattoo, you could opt for something ferocious as seen in this image, or a more timid or docile bear tattoo that could be a little less offputting for some who see it. 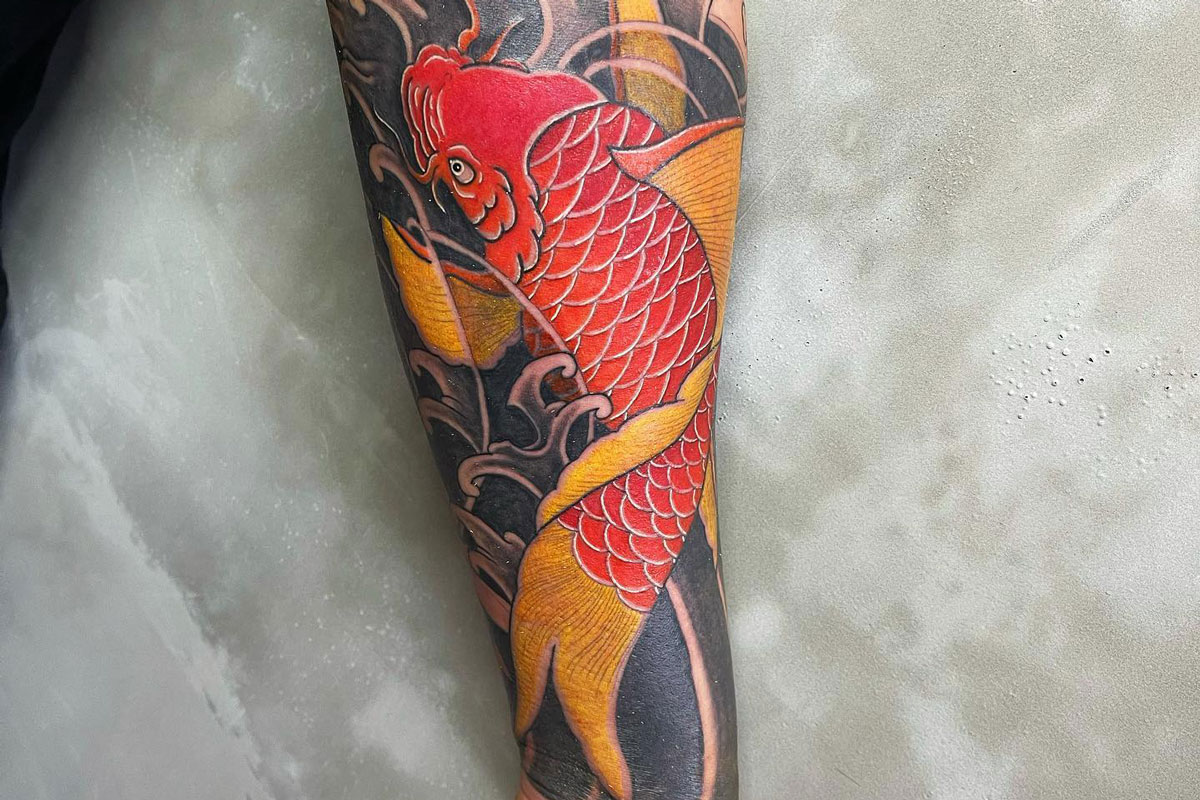 Almost everyone is in agreement that a Koi fish symbolises perseverance, making them a great forearm tattoo option for men who have overcome any struggles or is perhaps in the process of making changes in their life. Because of their radiant colour, a Koi fish tattoo idea is a good candidate to be tattooed with coloured ink, but if you get a good tattoo artist who can weave in plenty of detail, then a black one will still make for a great tattoo.