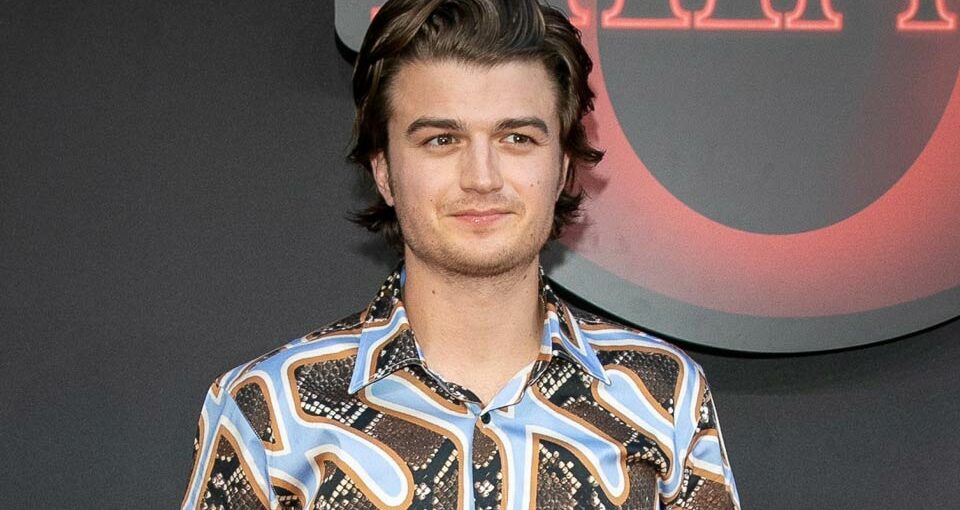 The mullet haircut. A divisive hairstyle if ever there was one, is defined as featuring short hair at the front and sides, but with a much longer section at the back of the head.

Proving popular with the surfing community, alternative pop-punk types and rock music legionnaires, the mullet has been seen atop the heads of many famous faces in the past few decades.

History Of The Mullet Haircut

While the term wasn’t believed to be coined until the release of the 1994 song “Mullet Head” by The Beastie Boys, the wearing of a hairstyle that was short at the front and long at the back was documented in the sixth century, when it is claimed some men rocked a hairstyle called the ‘Hunnic’.

However, the 1970s saw the then-unnamed mullet truly take off, with the likes of David Bowie, Rod Stewart and Paul McCartney all rocking mullet-esque hairstyles. In fact, these legendary rockstars are prime examples of what a classic version of the mullet should look like.

Mullets continued to be popular throughout the 1980s and 90s amongst various factions, from sports stars to musicians, and even DC Comics’ superhero Superman.

Today, the ‘modern mullet’, as it has been dubbed, has seen a surge in popularity for the polarising haircut, with short hair seen on the sides of the head, long hair at the back, and a medium-length hair on the top of the head.

How To Grow A Modern Mullet

Growing a mullet requires patience, especially if a cool mullet is what you’re after. If you’re someone who usually rocks short hair and has decided to make the drastic change to an incredibly bold new look, you’ll first need to wait several months, maybe even a year or longer.

This, however, is where various interpretations of what constitutes a modern mullet can come into play. In effect, as long as the hair at the back of the head is longer than the hair at the front, you’ve got yourself a modern mullet. Beware, however, that if you decide to have a number two cut at the front and a number six at the back, you’re fast encroaching into ‘skullet’ territory. And nobody really wants that.

How To Cut A Mullet

The mullet is quite unique in that, in some ways, the messier it is, the better it looks. Or at least, some guys will be able to pull off the “I cut it myself” look, as opposed to having it trimmed and pruned to perfection by a professional barber.

While many of us may liken ourselves to Edward Scissorhands, being able to wield blades and chop our hair to our exact liking, we’d still recommend going to visit a barber shop, at least to have the top and sides cut to a shorter length. Having an expert eye will ensure you get an even length in the areas you want, so you’re not looking lopsided and like a Picasso painting.

The rear section of your mullet is more down to your personal preferences, and if you just want to cut the ends (depending on your hair type, of course) then find yourself a friend do this in the comfort of your own home.

So, with the history out the way and with your newfound knowledge of how to get one, check out these images of the various types of mullet, from the historic looks all the way through to modern mullets, for inspiration.

Starting with the classic mullet that set off the entire mullet trend, we have the legendary Billy Ray Cyrus. This type of mullet haircut is one you don’t see too often anymore, with more modern interpretations taking centre stage.

However, for those who wish to give it a go, you’ll first need to grow your hair out to at least shoulder length (the longer you can get it on the back, the better). Then, ask your barber to cut the front and top, and blend it in with the hair at the back to create one seamless flow. 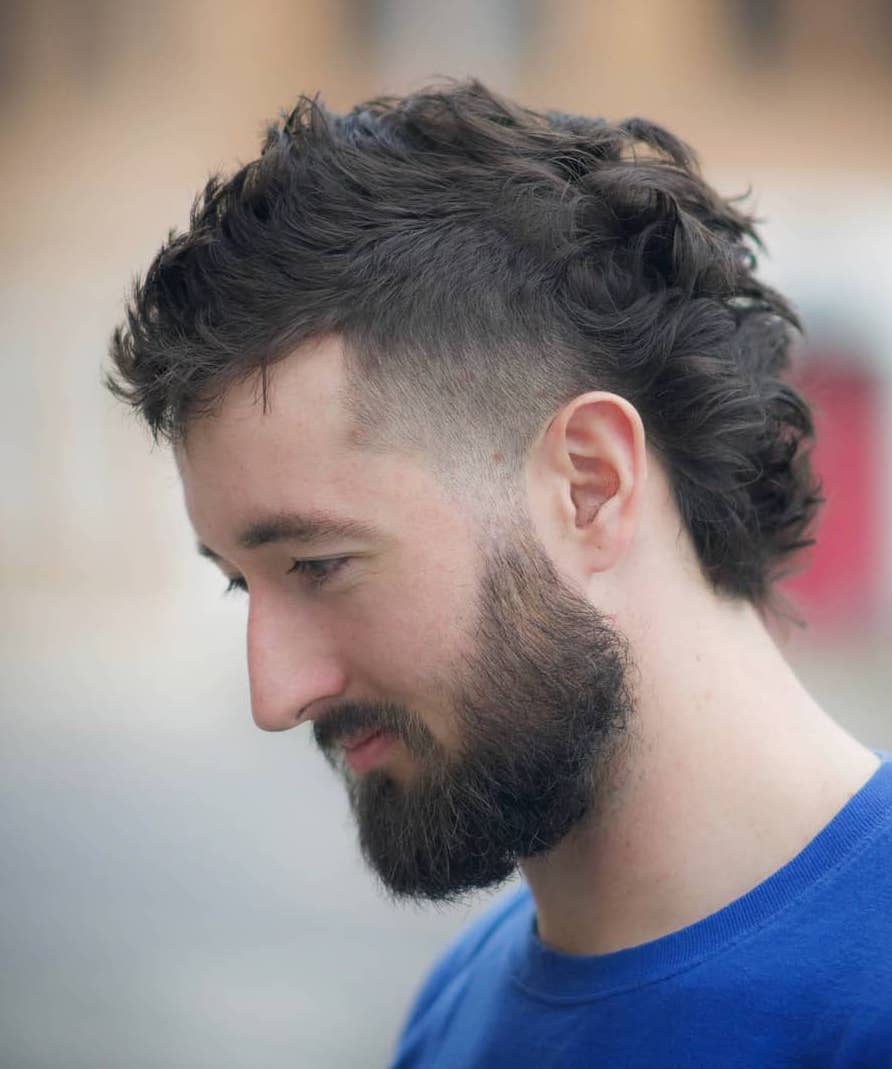 This is the more modern interpretation of the mullet haircut we’re talking about. Less of a contrast between the front and back but still undoubtedly longer at the rear, the modern mullet is one that is far easier to pull off and to maintain.

You’ll get fewer looks of shock when out and about, and instead, you’ll be on the receiving end of comments such as “sick look man!”. 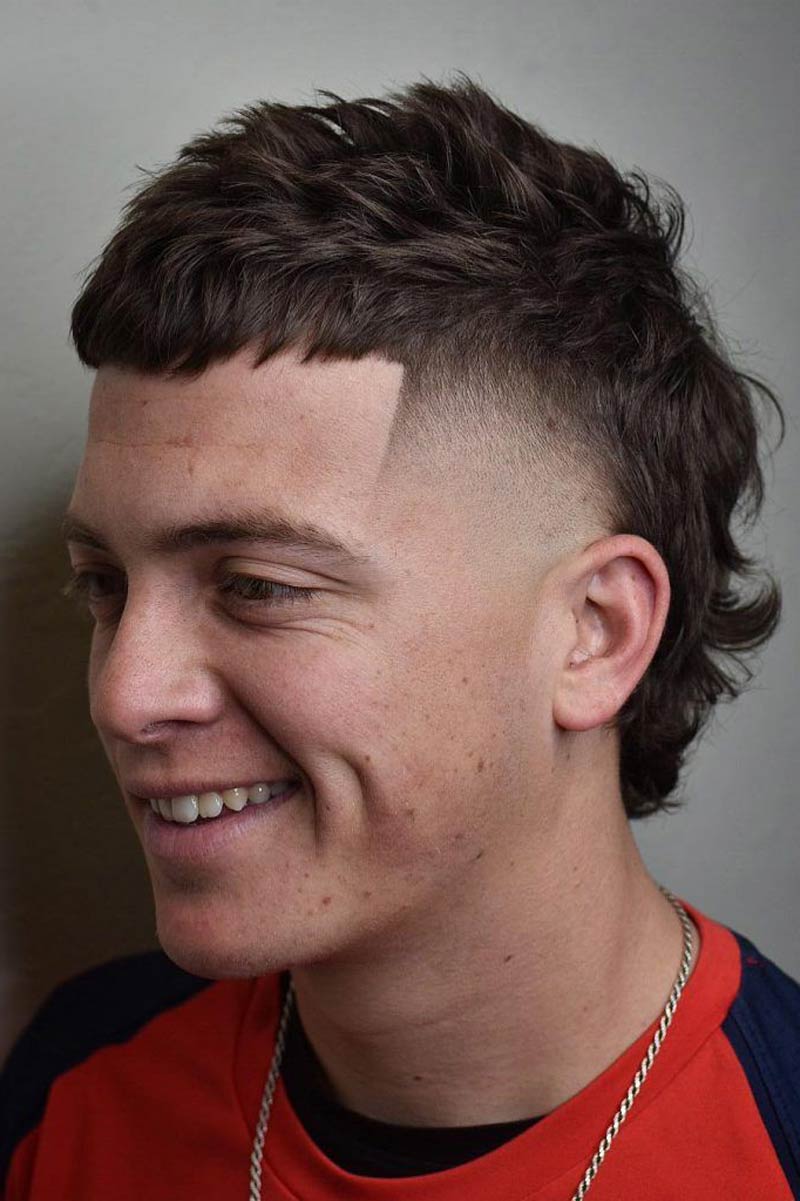 This look takes the modern mullet and makes it more accessible by incorporating a fade. The result is an undeniably cool haircut and one with attitude. There’s no right or wrong with regards to the style of fade either, as a low fade, medium fade or high fade will all work well. You could even experiment with a taper fade. Your face shape, however, may determine the height of your fade, so the best practice would be to ask your barber. 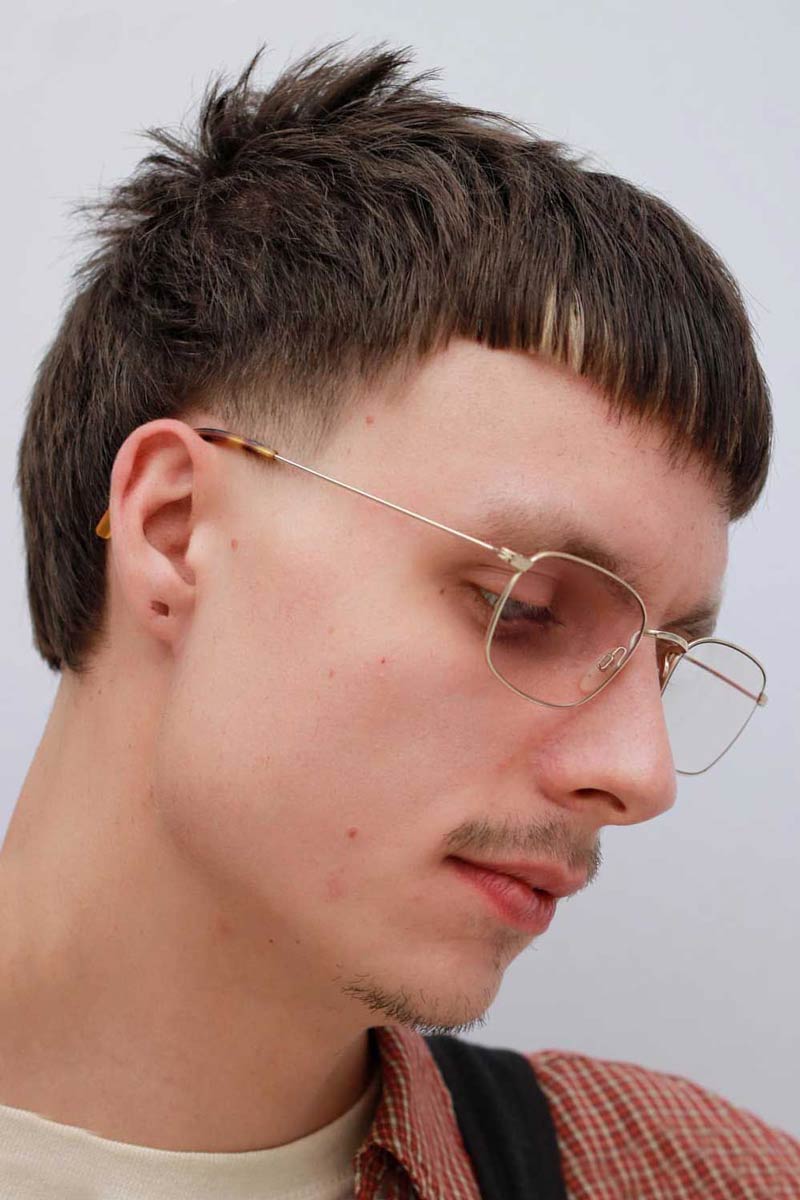 What do you get when you take one of the very best short haircuts for men and combine it with a mullet? Something similar to the image above, a wholeheartedly modern haircut that will earn you serious style points.

The French Crop part of this haircut (the top and fringe) should be a walk in the park for any well-trained barber but ask them to incorporate a fade on the sides and keep the length at the back, yet in proportion with the top, and you’ll walk out looking a million dollars. 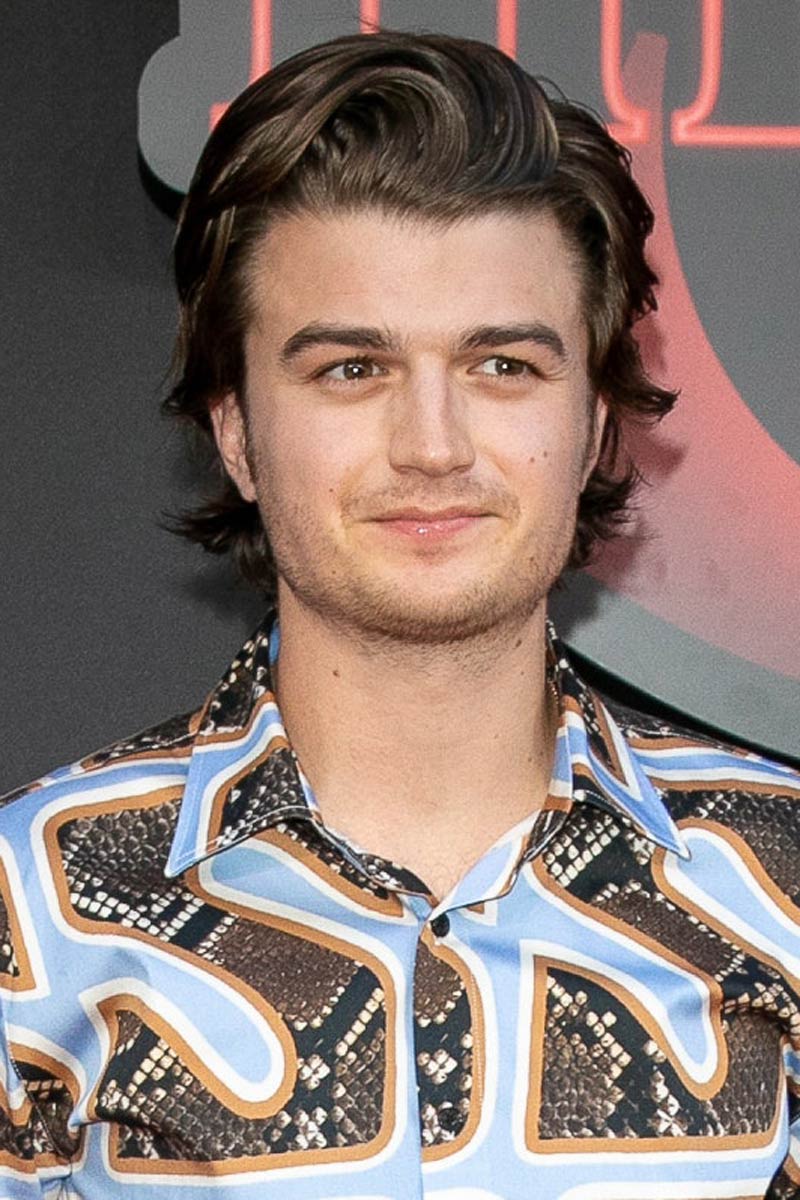 One of the more recent celebrities to spearhead the charge for the case of the mullet was Stranger Things’ Joe Keery. While he did eventually chop it off in favour of a bowl cut/French Crop, his luscious locks were the talking point of Hollywood. Here, he’s accentuated the length of his hair by blowing it up and backwards, using some high-shine product to not only keep it in place but to give it a thoroughly 80s look, in keeping with the theme of the show in which he stars. 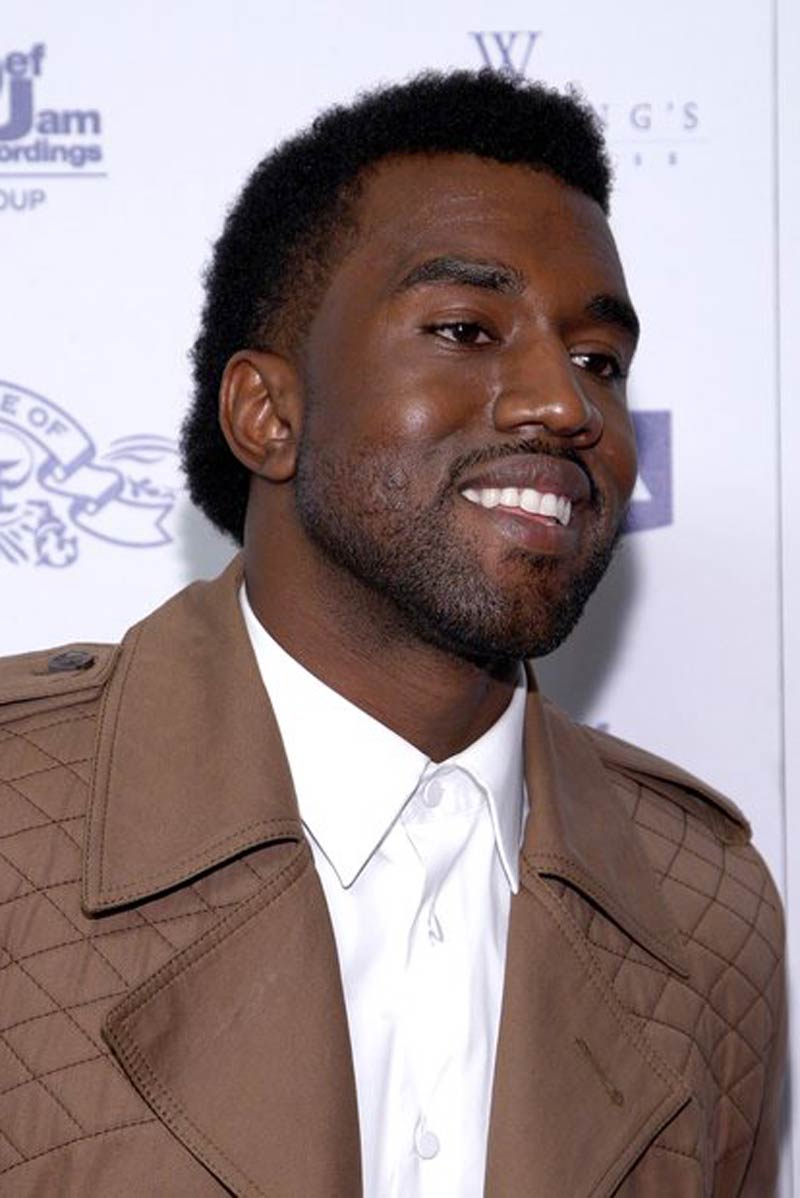 When Kanye West had hair, he once sported this afro mullet, confirming that men with any hair type can effectively rock the classic hairstyle. Faded at the sides and a similar length from front to back, this is definitely a haircut to try. 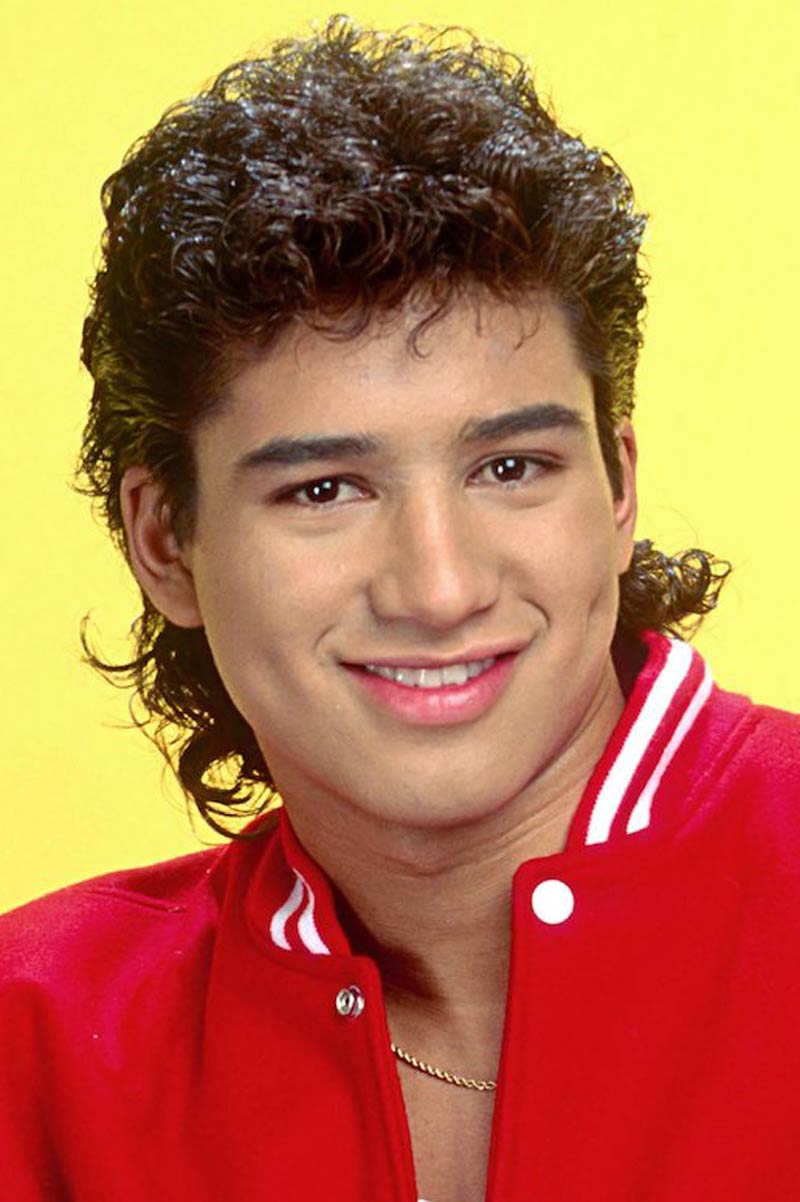 Curly-haired guys get all the luck. Not only does curly hair by its very nature look natural, textured and cool, but it actually suits the mullet style incredibly well. Taking a little bit of length off the sides, or using some styling product to slick it back and hold it in place, the curly-haired version looks, well, normal. The natural volume helps to disguise the change in length effectively, making it a surfer and hipster-worthy hairstyle that will remain timeless. 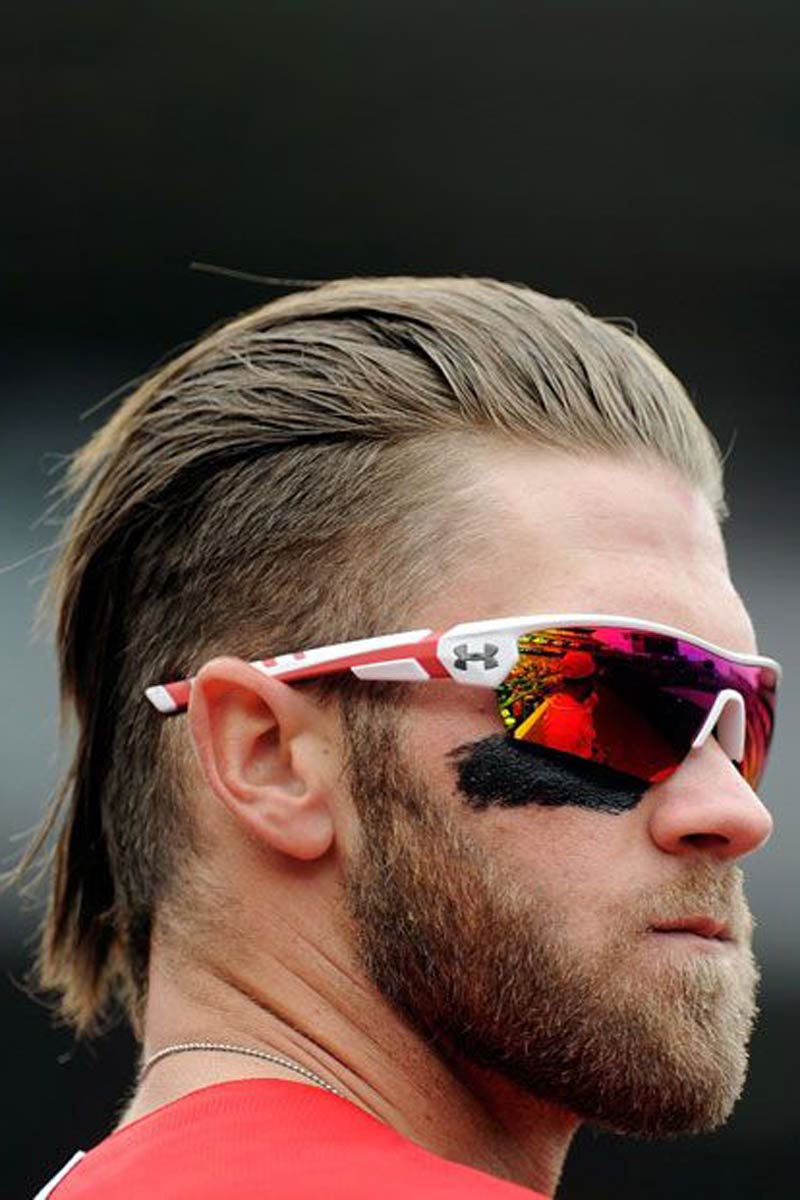 A hybrid haircut of sorts, bringing together elements of the undercut and pompadour to an extent, too. The undercut mullet haircut requires you to grow out the hair at the front of your head so that it can be slicked back, giving the impression it’s extending all the way back round to your neck. This can be helped by having the sides cut short. Most undercuts call for the sides to be cut to the same length, but if you feel like adding a little bit of fading over the ears, then go wild. 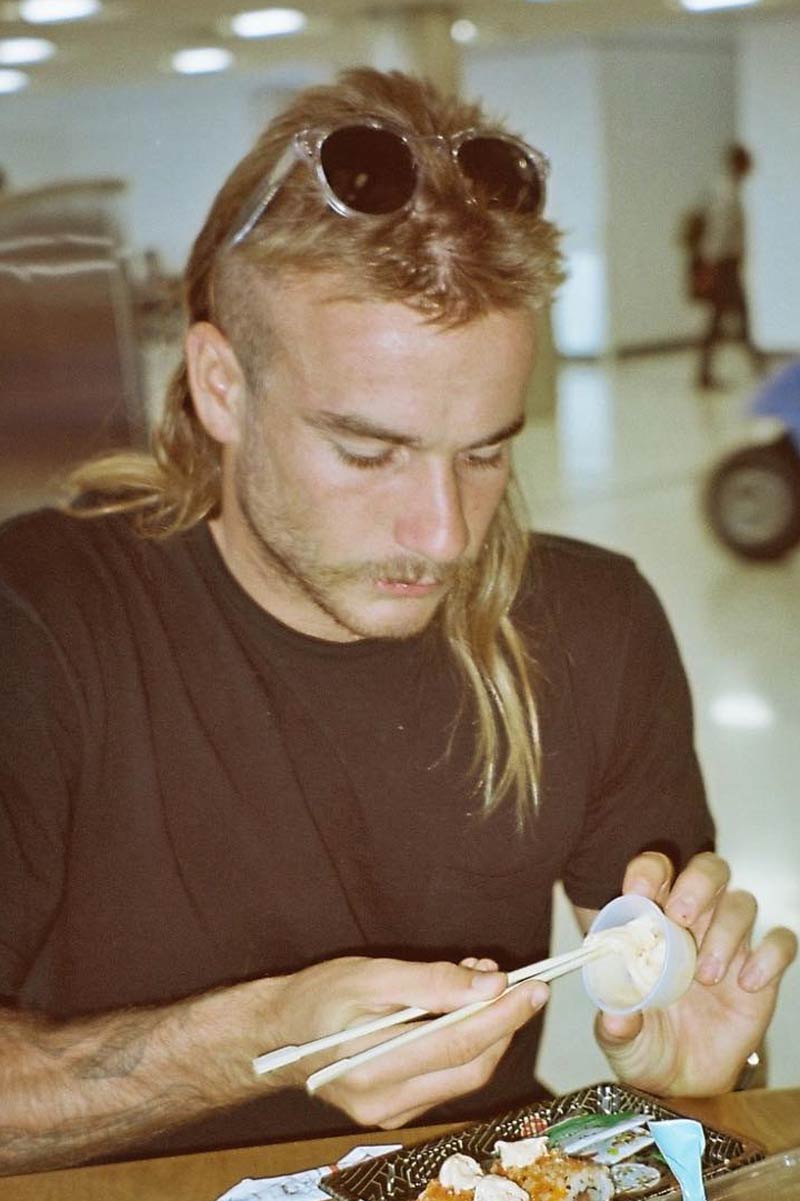 Also known as the long-haired mullet, this is the sort you’d see if you look to the waves at any of Australia’s beaches. Once vilified in Australia, surfing legends such as Mikey Wright are championing the iconic cut, which sees the hair on top kept relatively short, while the length at the back goes past the shoulders.

What is a mullet hairstyle?

A mullet is defined by short hair on top of the head and at the sides, and long hair on the back.

How to get a mullet hairstyle?

If you want a mullet, you’ll need to first grow out your hair so that there can be sufficient contrast in length between the hair at the back and the hair on the top of your head. Once you’ve grown it out, you just need to cut the top and sides to your preferred length.

Is the mullet hairstyle popular?

Yes, at least in countries such as Australia with larger surfing communities. The hairstyle is commonly associated with surfers, as it allows them to keep their long hair, but to not have it fall in front of their face when surfing.