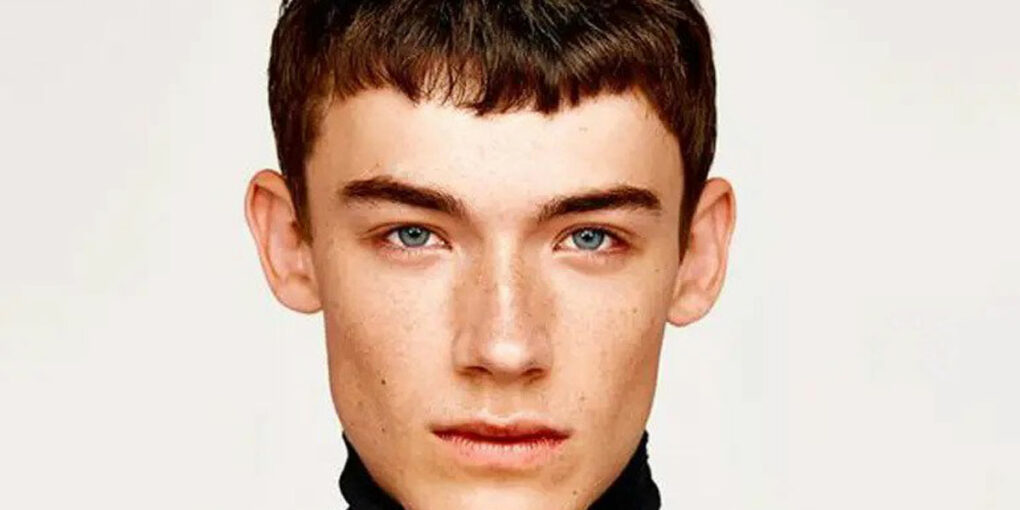 Men who rock short hair may think they only have a limited number of options available to them when it comes to styling options. But in reality, the opposite couldn’t be more true. Short haircuts can encompass everything from a buzz cut to an Ivy League to a crew cut and, to an extent, the undercut. But there is one short hairstyle that is one of the more versatile options, suits practically everyone no matter their face shape or hair type, and is incredibly easy to achieve: the French crop.

Defined by its slight contrast in length between the hair on top and the hair on the sides and back of the head, coupled with a blunt cut fringe, the French crop is a wonderfully stylish haircut that can be styled in myriad ways. It is a very low maintenance hairstyle and one that can be worn no matter the hair type, whether it be curly, straight, wavy or even afro.

How To Ask Your Barber For A French Crop

Any good barber worth their salt should know how to cut a French crop if you ask him or her. But if you have a specific style or look in mind, the best thing to do is take a picture along to show them. You can also drop some barber jargon on them to not only impress them, but give them a clearer idea of the exact style you’re after.

You’ll first want to ask for a short back and sides. However, the length here is entirely down to personal preference. You can incorporate a fade if you wish, such as a low fade or a taper fade, or go a little more drastic and ask for an undercut. Alternatively, you could go down a more buzz cut or crew cut route and rock one length all around, such as a number 3 on the clippers.

In our opinion, a French crop looks particularly effective when it has plenty of texture to it, so if your hair is naturally quite thick, you’ll want to ask your barber to point cut it. Point cutting doesn’t serve to remove length, but rather to cause graduations into the ends, thereby creating texture and movement. If the textured hair camp isn’t for you, then you’ll likely fall into the other alternative, which is to have it blunt cut. A blunt cut refers to when the hair is the same length all the way around, or as is the case of the French crop, the same length all over on top of the head.

The amount of styling required will be determined by the way you have it cut and the length to which you have it cut. However, as a general rule, you’ll want to apply some styling products to towel-dried hair. For a messy, ‘just got out of bed’ look, you’ll want to use a styling paste or clay and for a high-shine slicked-back look, pomade or wax will be your best friend.

Because, in general, you won’t have much length to play with, you shouldn’t need the assistance of a hairdryer to style your French crop – this isn’t a pompadour, after all – but you may need to call upon one if you opt for a longer variation (which we talk about more below).

So, now you know how to ask for a French crop and how to style one, allow us to bring you some extra inspiration with a selection of some of the best examples.

It’s always good to start with the original. The classic French crop is one that you’ve probably already rocked at some point in your life, you just didn’t know it. Exhibiting just a subtle contrast between the hair on top of the head and the hair on the sides and back, the classic French crop is one of the most low maintenance hairstyles out there, save for the buzz cut. The length of the hair is entirely at your discretion, and it can be styled with either a point cut fringe or a blunt cut fringe. 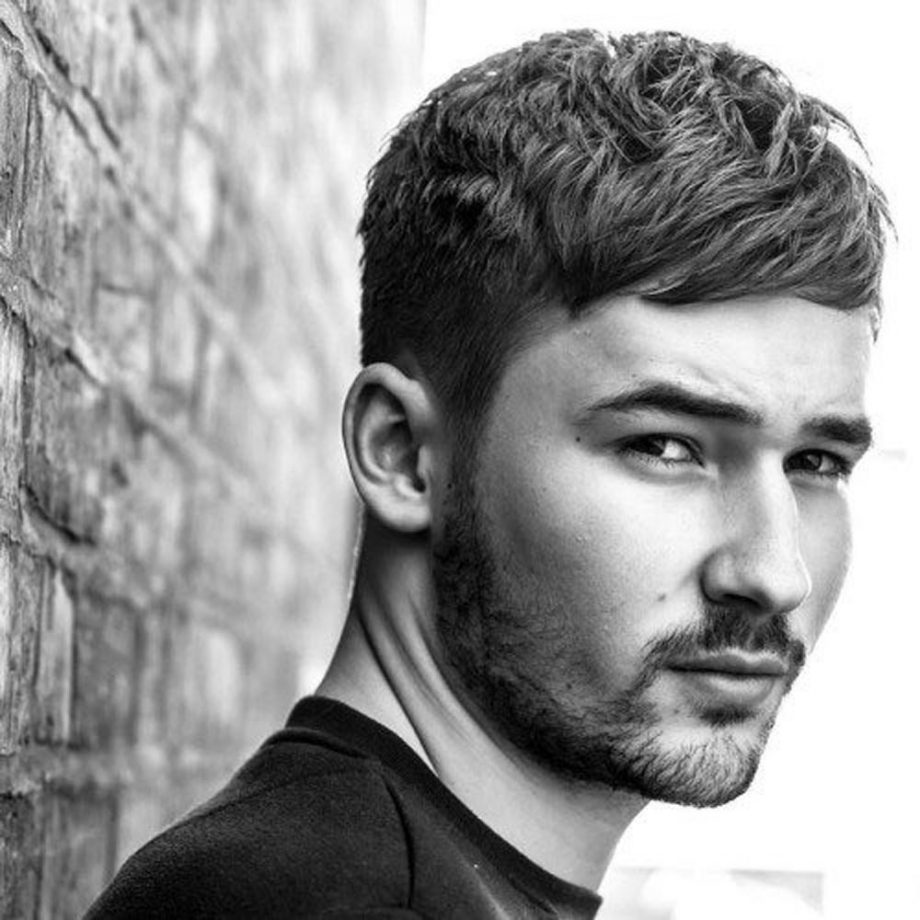 The long French crop simply sees the hair on top of the head left to grow to a longer length than traditionally expected. You’ll still want to keep the hair on the sides and back of the head kept relatively short – whether you go for something like an undercut is up to you – and this could mean regular visits to the barber.

Do so, however, and you’ll be rewarded with a highly versatile look since the longer hair on top will allow you to play around with incorporating other hairstyles such as side-parts and quiffs for some seriously stylish results. 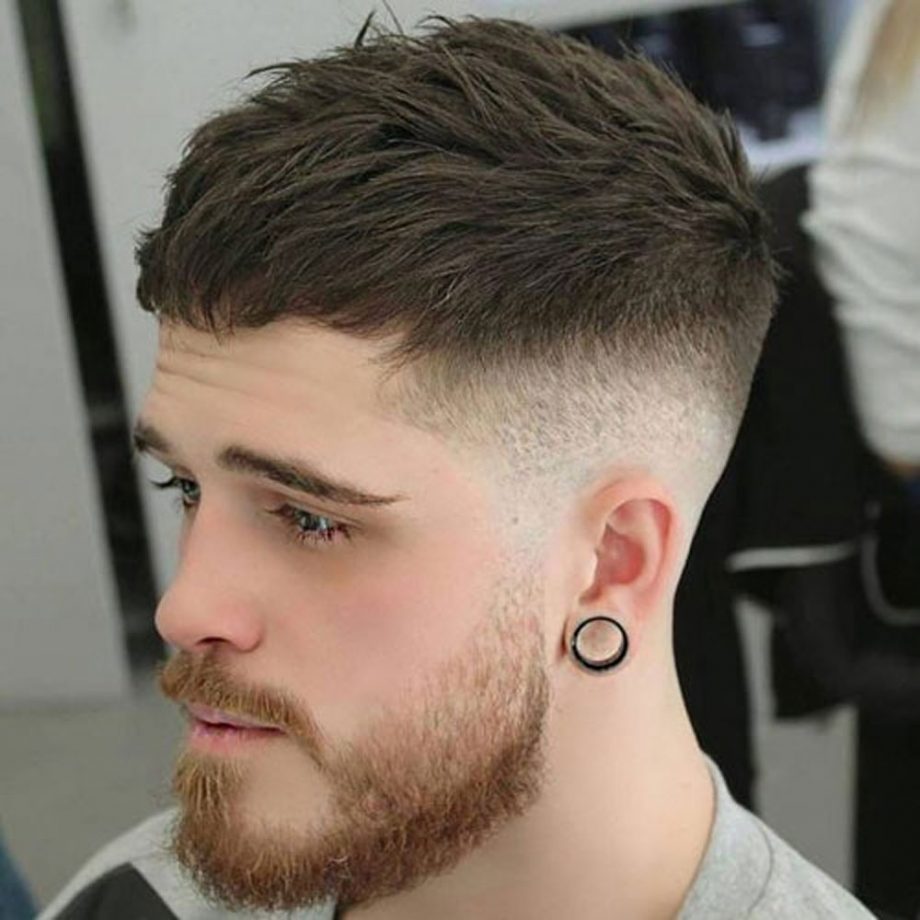 We’ve already mentioned it a few times, but the French crop works in perfect harmony with a fade. No matter the length and positioning of the fade, whether it be a low fade, mid fade, high fade or a more foolproof taper fade, combining longer hair with much shorter hair on the sides of the head is a surefire way to a stylish look.

This not only makes for an even more low maintenance haircut, but by removing extra weight and length from the sides and back of the head, you naturally give more focus to the top of the head. This means you can style it as much or as little as you want, so even a blunt cut French crop fade with straight fringe and no styling product can look as good as a slightly longer version with styling product worked through it. 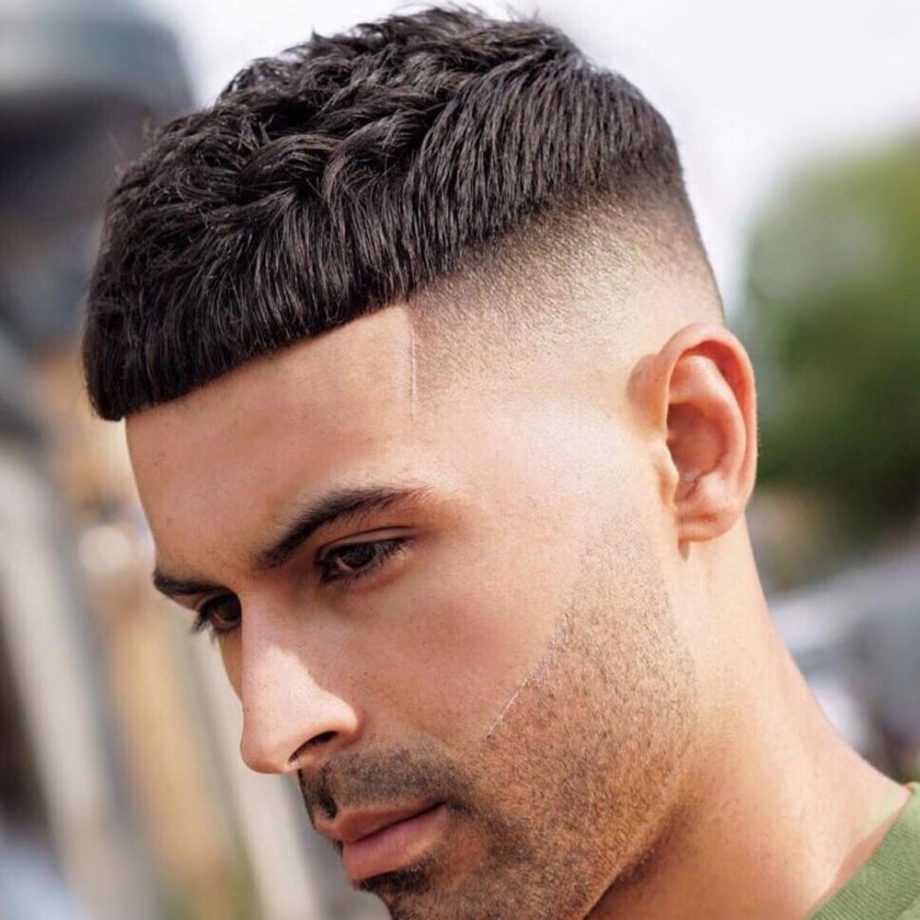 The disconnected French crop clearly separates the top of the head from the sides. No fade or blending of hair here, just a straight cut – just as a way of separating them, the undercut could introduce a slight fade, as opposed to drastic contrast. In a similar vein to the French crop with fade, employing a disconnected look puts the focus solely on the top of the head.

The length on top is entirely down to personal preference, with practically all options available to you. This French crop can even work for guys with curly or wavy hair, with the natural curls providing volume and texture for a head-turning look. It’s also an option that can work particularly well for black men with afro hair. 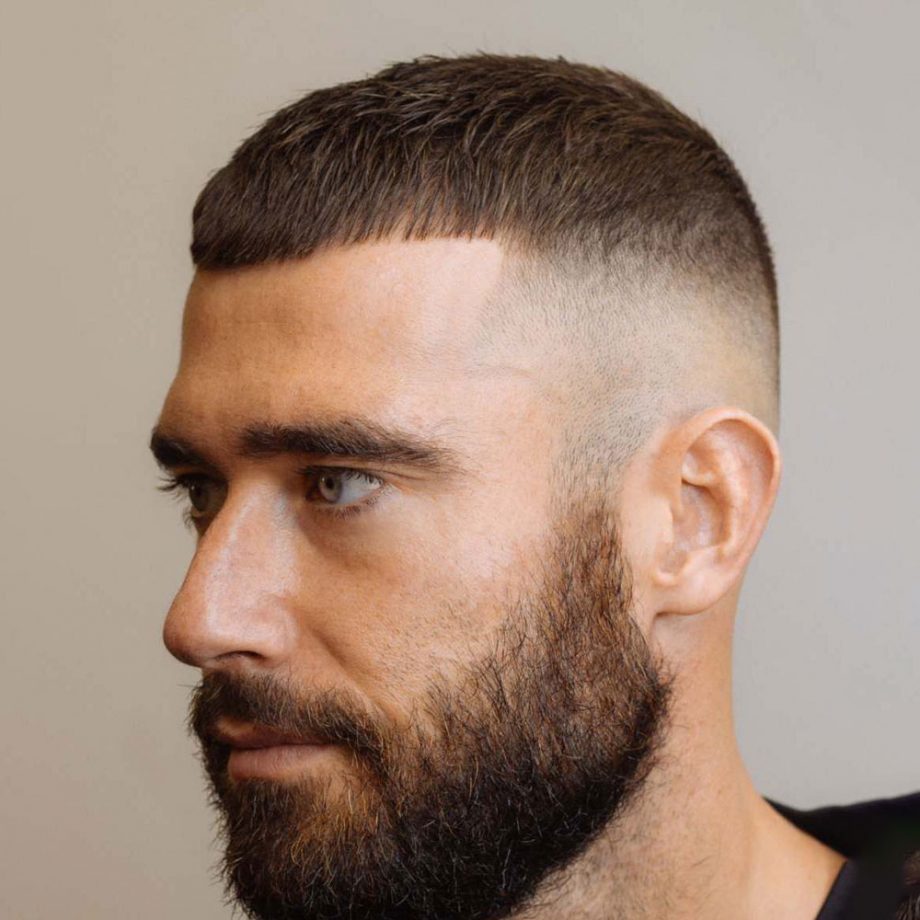 The short French crop haircut doesn’t differ too much from the classic, however, the sides and back of the head are cut to a shorter length, and the hair on top is often cut a little shorter too. The short French crop is a natural pairing for the high and tight fade, leaving a small, short section of hair on top of head that requires little to no styling whatsoever.

For us, the short French crop haircut benefits greatly from having some texture cut into it if your hair is particularly thick. But if yours is naturally very straight, blunt cutting the fringe will give you a simple and stylish look that can work incredibly well in formal situations. 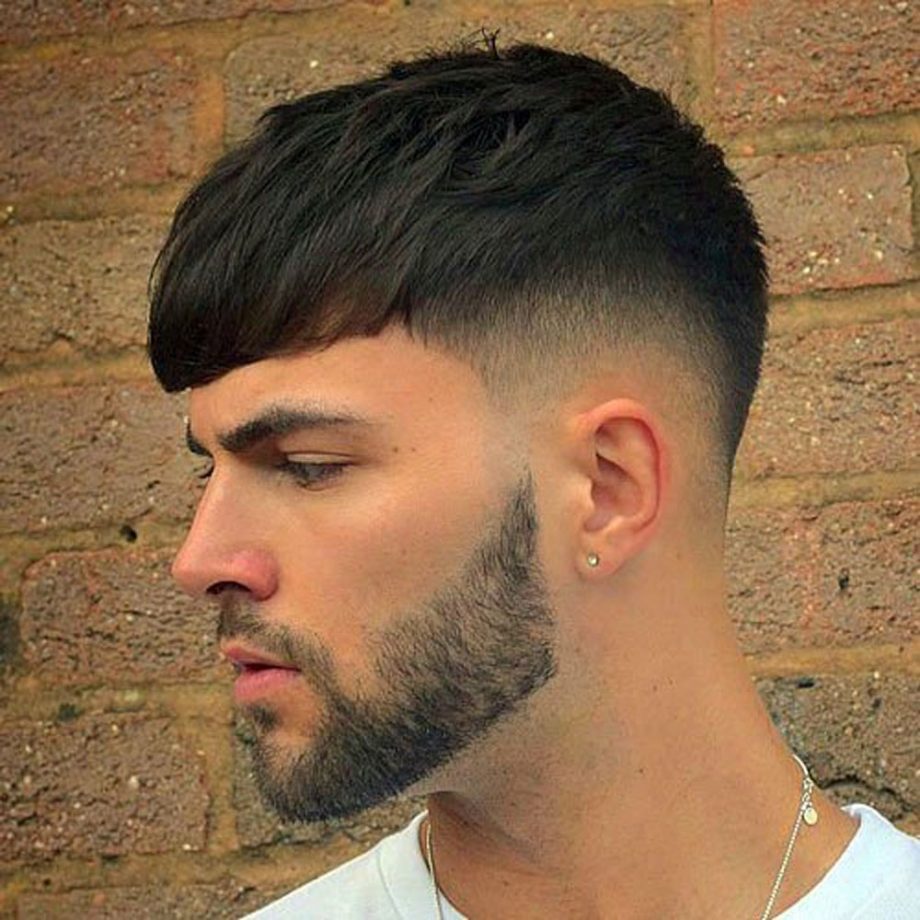 Ok we know, we said a little earlier that the disconnected French crop was essentially the same as the French crop undercut, but there is a little bit to separate the two. The undercut section of this hairstyle can introduce a fade if you wish, or the defining line between the longer hair and the short hair on the sides and back of the head can occur at various points on the head. The disconnected French crop, however, will usually see the contrasting line around the temple of the head.

An undercut plays nicely with hair that can be styled, particularly if it can look messy. In this case, you’ll want to make sure you have plenty of texture to the long hair on top of the head and style is with a matte effect product. Conversely, with that long hair on top, and using a pomade or wax, you can slick it back, allowing you to seamlessly switch between boardroom and bar. 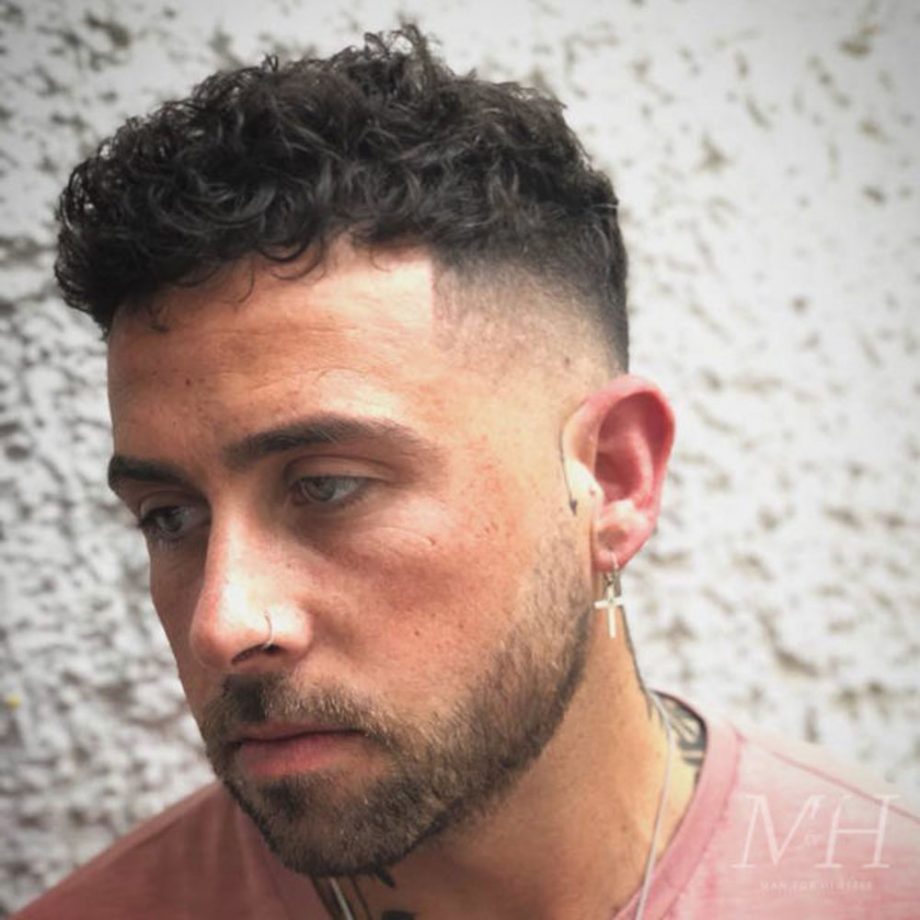 We made a passing mention to it earlier, but yes, men with curly hair can also reap the benefits of the French crop. Because of the natural volume and texture afforded by curls, guys who wish to achieve a curly French crop will do well to have the sides and back cut as short as possible, or at least so that the curls are removed.

You don’t want to have a blunt cut fringe if you have curly hair, it just won’t look good. Instead, just ask your barber to make sure it’s kept neat and tidy – this may need some point cutting to remove some of the ends – so that the curly hair can be styled in an effortless way that will leave you looking sleek and sophisticated.

8. French Crop With Comb Over 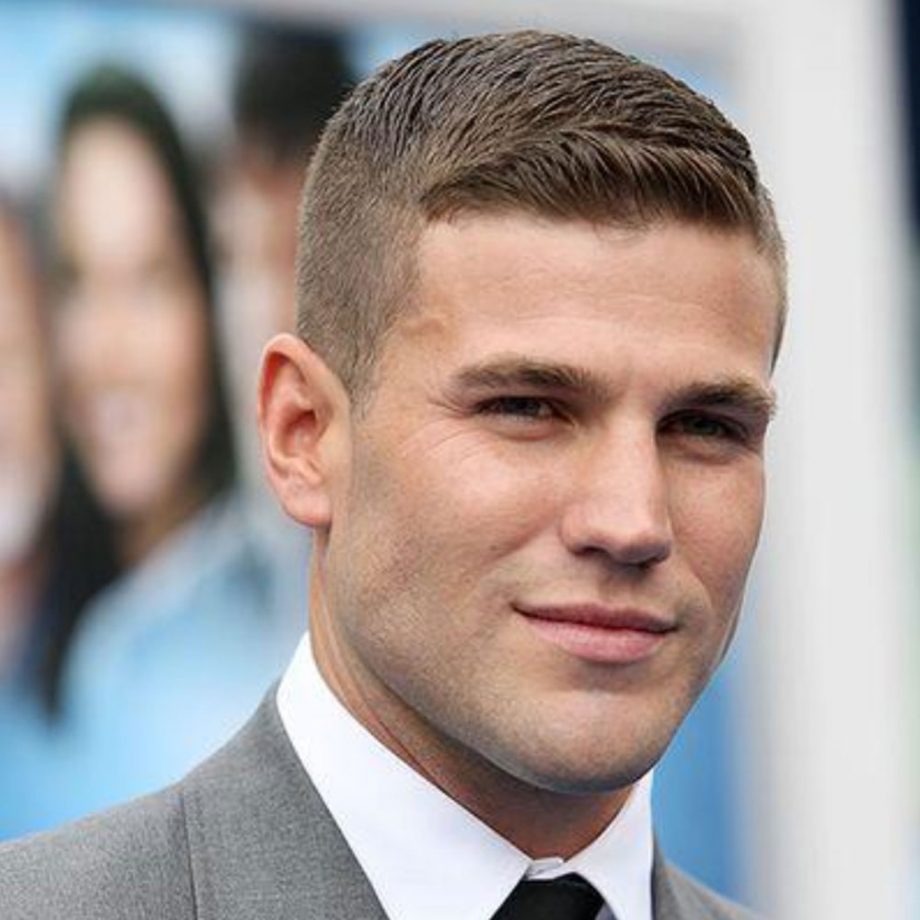 Although the French crop is usually defined by the way the fringe is cut, it can also be paired with something like a comb-over on those days you need to look slightly more professional. However, in order to achieve an effective comb-over, you will need some good length on top of the head. You can once again choose to have the sides and back of the head cut to a shorter length, or in the case of the comb-over hairstyle, a similar length all over will work.

Combining a comb over with your French crop is also one of the few variations that can benefit from the use of a hairdryer, as it will allow you to style the hair over to one side of your head much easier, while also helping to lock it in place. Once dry, you’ll probably want to add some styling product to ensure it stays there all day long – this variation looks particularly great with a high shine finish – and adding a light spritz of hairspray will ensure a hair never falls out of place. 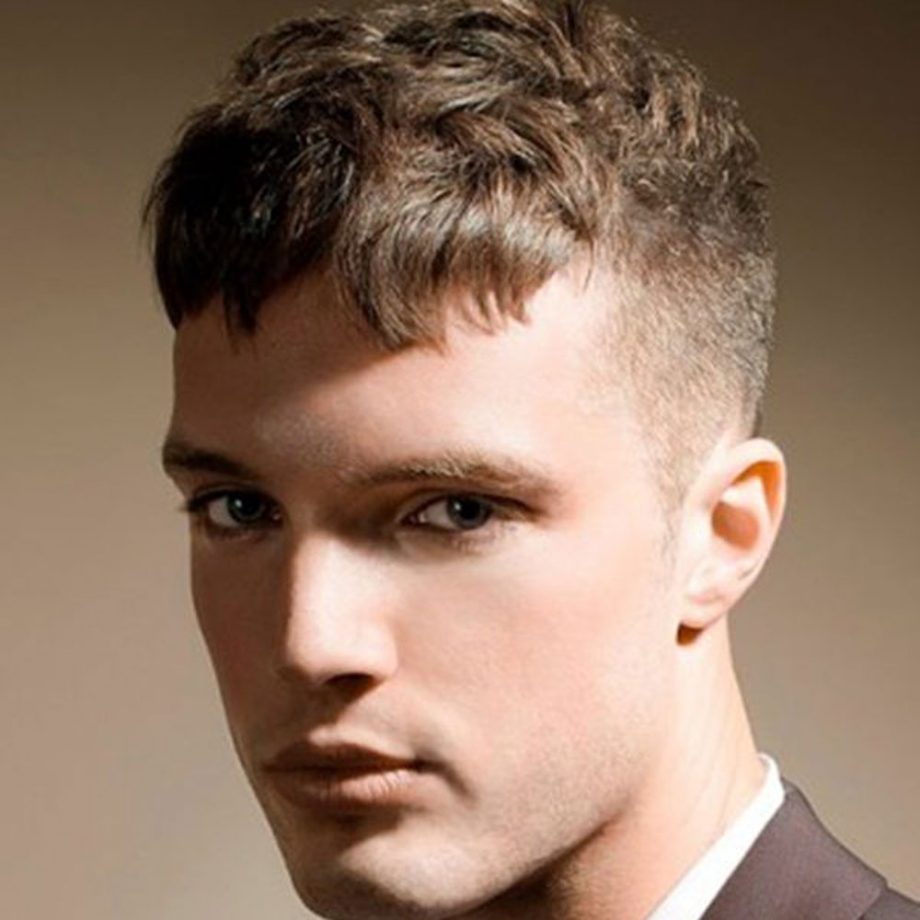 It’s an unfortunate fact of life that some men will suffer from a receding hairline. Guys who experience this may feel like they have little to no options when it comes to finding a stylish hairstyle to help take attention away from it, but the French crop is a perfect remedy. Because it’s styled forward, the French crop can often serve to cover up the receding hairline to a point where you wouldn’t even realise.

For greater effect, try experimenting with a high fade, a high and tight fade or even a skin fade on the sides and back of the head to help create the illusion that you prefer the ‘no hair’ look. Then, with the rest of your hair being grown as long as possible, enlist the aid of a hairdryer to style it forwards, work some styling product into it and everyone you meet will be none the wiser. 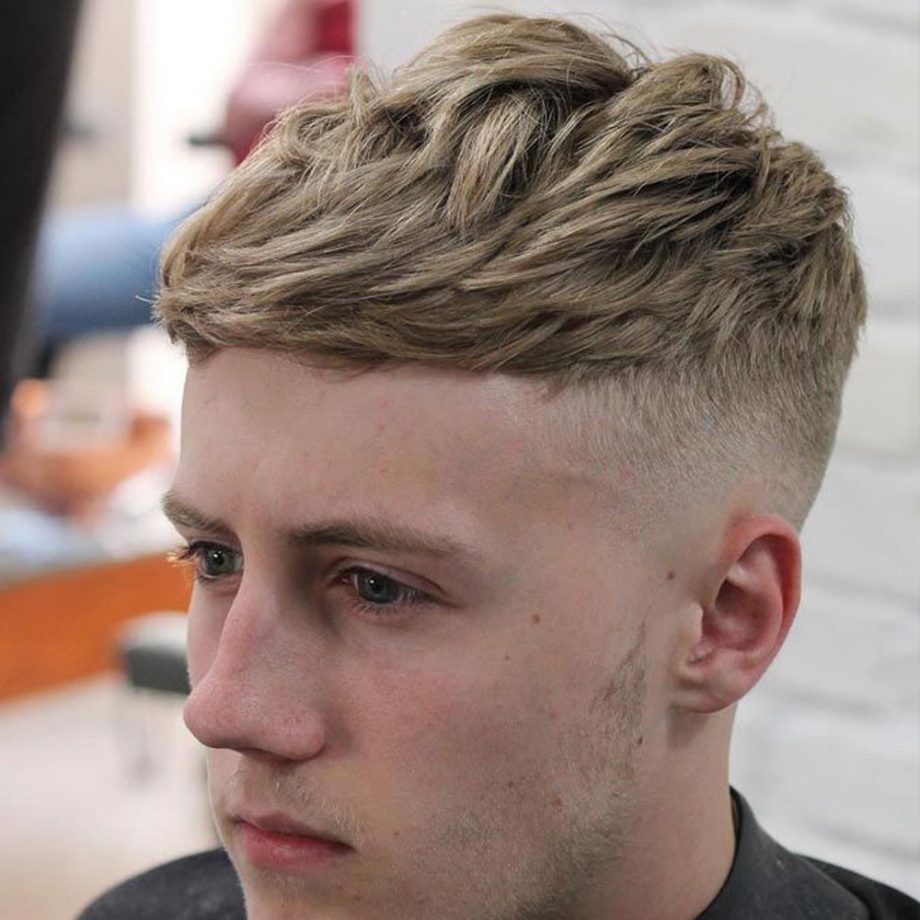 The textured French crop is incredibly similar to some of the other hairstyles we’ve already listed, but takes the notion of texture and dials it up a notch. This is a variation that benefits greatly from naturally thick hair, so unfortunately for men with thin hair, you may need to look elsewhere.

However, for those with thick hair, have your barber work their magic with the scissors to not necessarily remove length, but just a little bit of weight throughout, so that you’re left with enough texture that doesn’t even need styling product to look good.