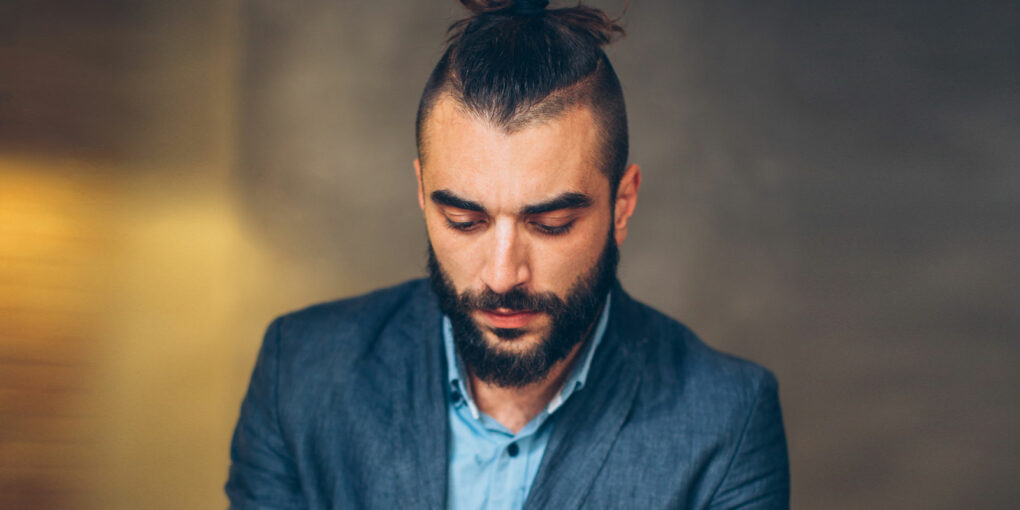 No longer just a haircut for practising yoga masters, your wife’s tennis coach or the guy at university who has had one since “before they were cool”, the man bun is a men’s hairstyle that has waded through its fair share of criticism and cemented itself among the upper echelons of hairstyles for men.

Also known as the top knot or high bun, the ‘man bun’ is a hairstyle that is born out of serious patience. You need to wait some time for hair to grow out, after all, so that you pull the hair back and throw a hair tie around it. While the man bun tends to function best for men with thick hair, the actual length of the hair can range from medium length hair to long hair, and still provide enough to tie up.

But as with any men’s hairstyle, there are several variations of the man bun that you can employ, each with their own unique style that can make or break your overall look. We’ll take you through some of the most popular men’s man bun hairstyles, from the messy man bun to the bun with beard, with style cue from man bun toting celebrities such as Jared Leto and Jason Mamoa.

While the Fabios grow their hair for the pleasure of preening and primping for hours on end, having a pristine mane that’s long and lush isn’t viable or important for most. Nor does it feel very masculine. The man-bun avoids all this precision styling, allowing you to grab your locks and tie them up, completely fuss-free. But certainly not style-free.

The half-up top knot – which we liken to a samurai-inspired ninja knot – is a man bun using only the hair on top of the head. This top knot can be paired with an undercut if you wish, seeing you cutting the hair on the sides and back of the head to razor short length. This makes the man bun pop, and is a far more ‘fashion-y’ version of the man bun.

However, an undercut requires regular maintenance, so for those less willing to visit the barber every week or so, you can imitate the guy in the image above. Still using just the top layer of hair to put into a hair tie, the half-up top knot man bun can pair flawlessly with long hair (or medium length) flowing down past your shoulders. 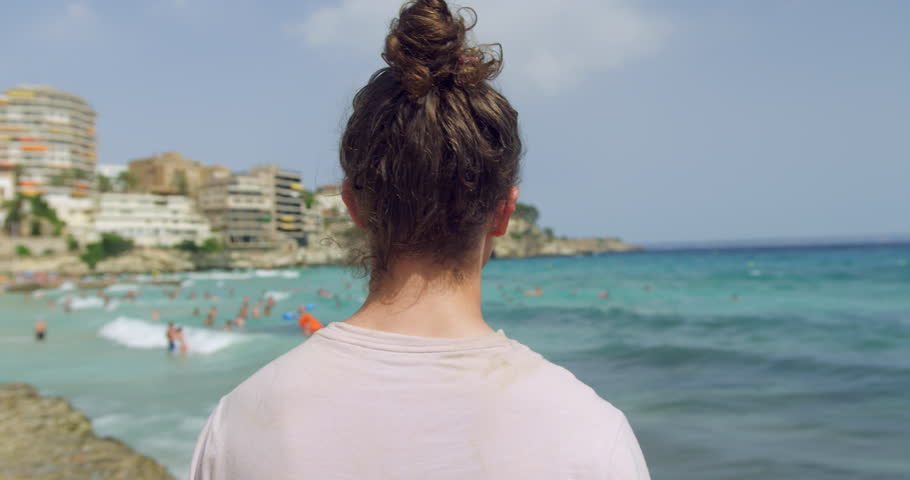 The windswept, salty benefits of beach hair extend to the man bun. The surf and sun are great thickeners of hair strands and lightening their pigment, which can then be swept up into a man bun, away from the face post-swim. A full bun is the foundation of this look, which sits loose and mid-to-high level at the back of the head.

Expect some fringe strands to fall out along the way, adding to the just-came-in-from-a-wave look. Cooler still, try the ninja knot but without the undercut, so you’ve got hair length flowing at the back of the head with a small bun tied neatly on top. 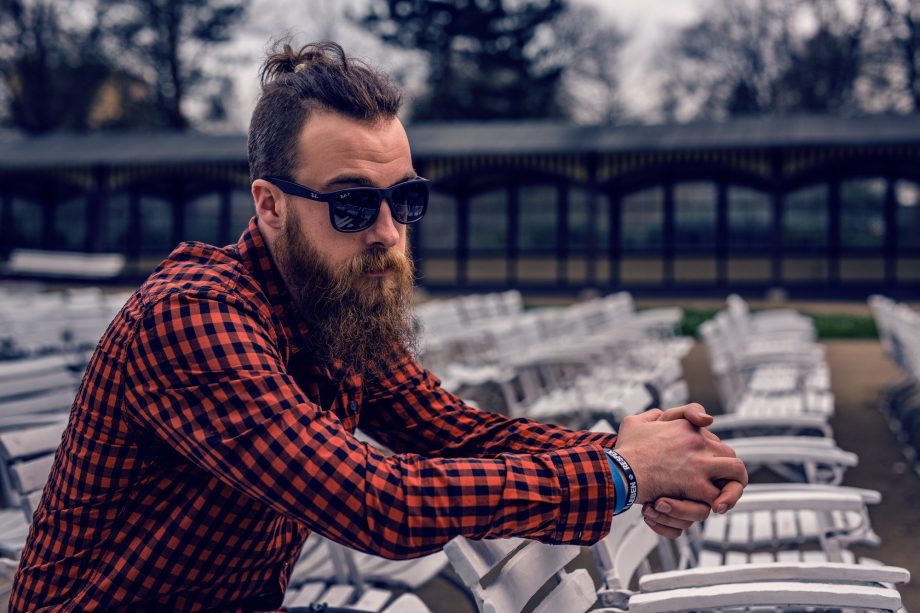 There are few things more masculine than body hair. So if you boast follicular prowess, you should exploit it and show it off. That’s where the man bun and beard comes into play. One of the most common man hairstyles you’ll see, if you can grow long hair both on your head and from your face, you’ll be the very epitome of burly.

Yes, this man bun hairstyle may bring up connotations of hipsters, but it’s a cool hairstyle nonetheless and one that you should definitely consider if you think a man bun is for you. The beauty of pairing a man bun with a beard is that you don’t necessarily need the hair on your head to be super long, as a long beard can make up for it.

It also works for men with all hair types, whether it be straight hair, curly hair or long wavy hair. Once you’ve got your hair to a good length to tie up, then you can make it as preened and proper or messy as you like (in our opinion, a messy man bun fairs far better in the style stakes). 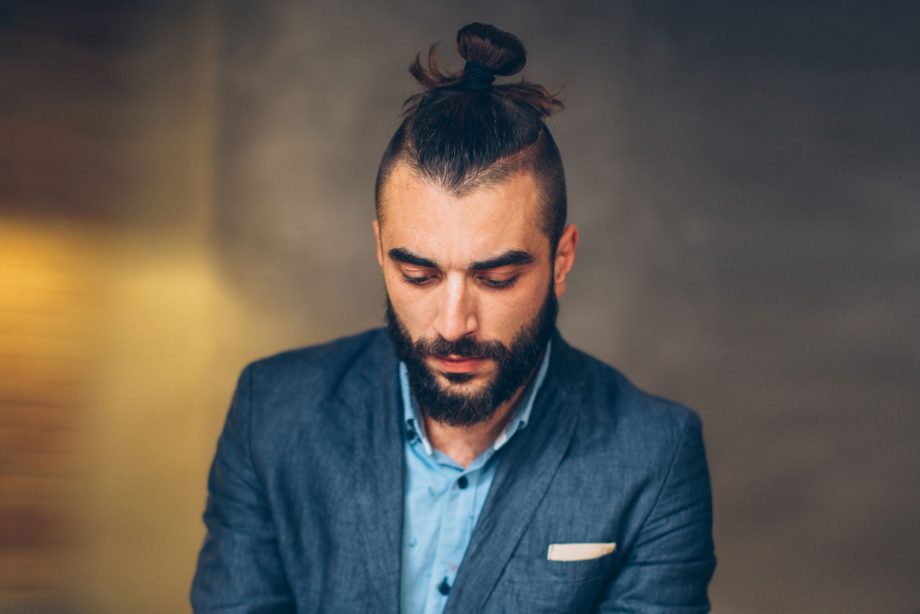 While the man bun isn’t the most corporate-friendly men’s hairstyle on the (stock) market, the business bun makes it work. Nothing shaved or sheared here, make sure the man bun is relatively inconspicuous: sitting low to midway up the back of the head.

Styling options could be sleek with a bit of hair oil to keep the pieces in place or a matte, dry finish with hair paste. Just don’t overdo the oil, Mr Grease. 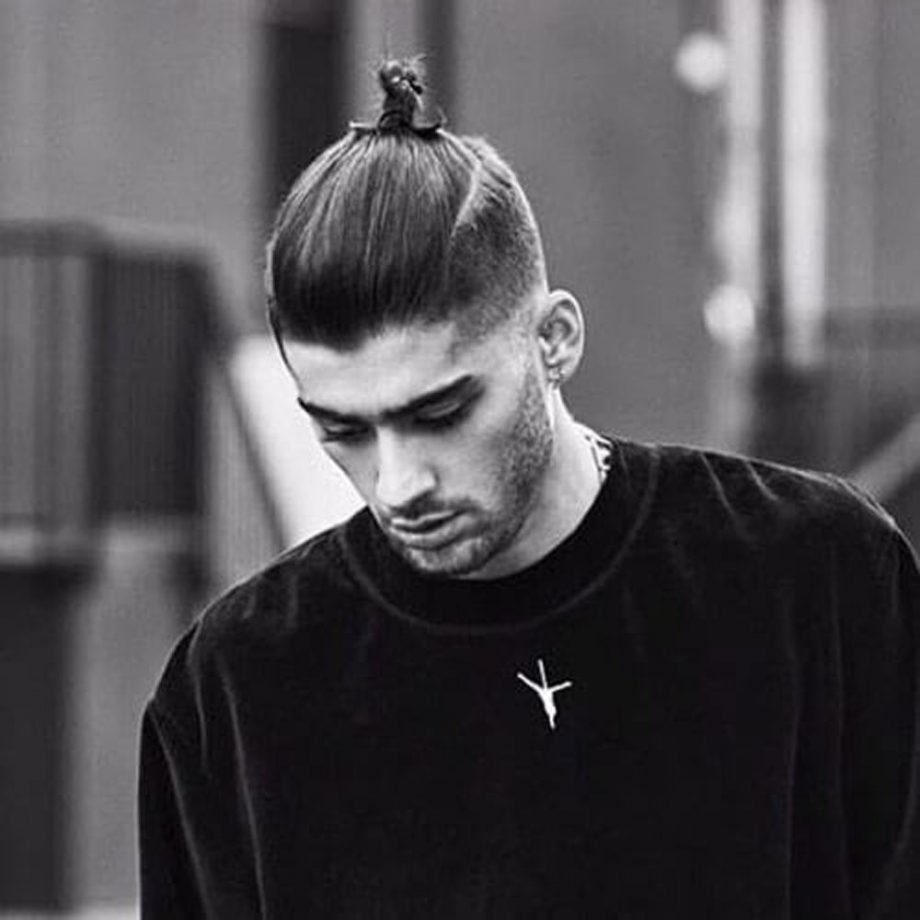 The mini man bun is the hairstyle most men will attempt in their quest for a fully-fledged version of the notorious hairstyle. Once your hair length passes your ears, or at least reaches the bottom of them, then you should be ready to grab a hair tie and start your man bun journey.

While you will likely see some men tie their mini bun knot high up the back of the head, this man bun hairstyle fares far better if the knot is kept a little lower, as it won’t pull on the hair so much, meaning it’s less likely to come untied, and less likely to give you a headache.

You can, alternatively, pair the mini man bun with a undercut, leaving hair just on the top of your head. In this instance, a man bun tied higher up is a) the only possibility and b) a super stylish option.

How To Tie The Bun

To tie a man bun, take an elastic hairband or a neutral-coloured hair tie and pull the hair back – starting from the forehead to the crown to the back of the head – aiming for one clean swoop. Once you have collected all your hair at the point where you want you man bun to form, you’ll be left with a ponytail.

Taking Care Of Your Bun

The man bun requires you to have long hair. And the key to long hair is taking good care of it (even if you do make it messy). Getting it cut regularly prevents excessive dryness at the ends of the hair, which can leads to split ends and fuzziness.

Come shower time, invest in some good quality shampoo and conditioner, ensuring you use enough to cover all the hair, especially the ends. A deep conditioning treatment is useful for the ends too and a leave-in conditioner applied weekly or fortnightly is certainly something you can do to help keep your hair looking healthy.

Finally, if you’re prone to using hairdryers or straighteners, apply a heat protector before hand. Again, pay special attention to your ends as a lot of the natural oils from the scalp can’t work their way to the end of the hair shaft. You want to have even hair-health, from root to tip.

What does having a man bun mean?

It means you’re in touch with your sensitive side, a man of the people.

Who wears a man bun?

Manly yuppies, hippies and the homeless.

How long does it take to grow a man bun?

You will need between 6-12 months to grow a man bun.