The Best Deodorant For Men Who Want To Smell Good

Best Deodorant For Men who Want to Smell Good

It’s time to look at deodorant with fresh eyes (and a fresh nose). Once it was a simple choice between whatever you were given at Christmas and something with a scent called ‘Cool Blast’ (whatever one of those smells like). Now it’s an armpit onslaught comprising 48-hour Xtreme arctic ice 7-in-1 invisible anti-marks technology, and fragrances locked into micro-cans so compressed they’d go off like an IED if dropped on the bathroom tiles.

And that’s not where our admittedly labored comparison with explosives ends, because shopping for deodorant is a veritable minefield. Which is where this guide to the best deodorants for every kind of man comes in.

The Best For: The Office | Sensitive Skin | Natural Ingredients | For Sport | The Bathroom Shelf | Excess Sweating

Far from a simple matter of grabbing whatever canister catches your eye. Picking the right product for your pits comes down to your lifestyle and how you need it to work.

“One size doesn’t fit all when it comes to deodorants,” says Josh Plimmer, brand manager for Sure Men and Dove Men+Care. “In your gym bag, for example, you need something that reacts to intense movement and minimizes odor, whereas in your desk drawer it’s best to opt for light-smelling formulations that you can layer a fragrance on.”

In other words, if you regularly finish up five-hour sumo wrestling sessions with a stint in the sauna, you’ll probably need to douse your oxters with something a little more potent. Equally, if you travel a lot for work, you’re not going to want to be lugging something the size of a small baguette around in your luggage.

Though there are slight differences between the two, whether you choose a roll-on or aerosol application largely boils down to personal preference.

“Roll-ons deliver more active ingredients directly into the armpit area,” says Plimmer. This is why deodorants to treat hyperhidrosis (excessive sweating) often come in this from.

“Anti-perspirant sprays are great for broader all-round protection,” Plimmer says – ideal if your personal odor isn’t confined to one place. However, you may not make friends filling the changing room or train carriage with a mentholy mist. So choose wisely.

It’s advised that you switch up your stick every six months to avoid your body becoming immune to the ingredients. But it still pays to know what exactly is in that stuff you’re so happily slathering onto your body.

Though environmentally harmful chemical propellants have been banned for some time, some ingredients can still leave your skin angrier than Jeremy Clarkson without a hot meal. Guys with sensitive skin, in particular, should look to dedicated and alcohol-free formulations to minimize irritation.

Blokes with normal skin aren’t off the hook. If your wardrobe comprises mainly white T-shirts, deodorants packing aluminum have largely been identified as the culprit behind those yellow stains, so are best swerved.

The Best Deodorant For Men Who Want To Smell Good

We’ve scoured the aisles and aisles (and aisles) of options to bring you a curated list of the best sprays and roll-ons to tackle dreaded underarm funk. Yes, it took a while. And yes, they all come in on budget. Thanks, you say? Don’t sweat it.

Best For The Office

Much like your aftershave and your handshake, when it comes to office deodorant you want to avoid anything too strong and lingering. These are the deos that will see you through the week with armpits drier than your boss’s personality.

Compressed into a can half the size of a regular spray, this handy option is small enough to stow away in your desk drawer for after-work drinks or slip it into your bag for use en route to meetings.

This invisible antiperspirant from Dove Men+Care does exactly what it says on the tin. Well, it’s not actually invisible because we managed to find it, but it certainly won’t be leaving any nasty white marks all over your work clothes. Always a bonus.

It may be one of the pricier options, but this premium deodorant is specially formulated using science, MenScience to be precise. As well as being void of tee-wrecking aluminum, it’s also fragrance-free, so your signature scent won’t be fighting for attention.

Let’s be honest, sometimes using a powerful antiperspirant can feel akin to lathering on wood glue and praying that the gross underarm feeling goes away before your date arrives. Worse still, certain ingredients can cause irritation such as dry skin, itchiness and even rashes. Any of these alone is enough to make you work up a sweat. Here’s how to sort it.

Vichy’s 48-hour sensitive deodorant contains soothing ingredients such as oligo-zinc. On top of that, it’s artificially fragranced and alcohol-free, making it tailored to delicate little flowers like yourself.

Formulated using antioxidant-rich birch tree sap, giving it a fresh, woody fragrance, L’Oreal’s Sensitive Control deodorant is made to cater for even the driest and most irritable of skin. It also offers up to 48 hours of protection, but we don’t recommend you go that long without washing, to be honest. 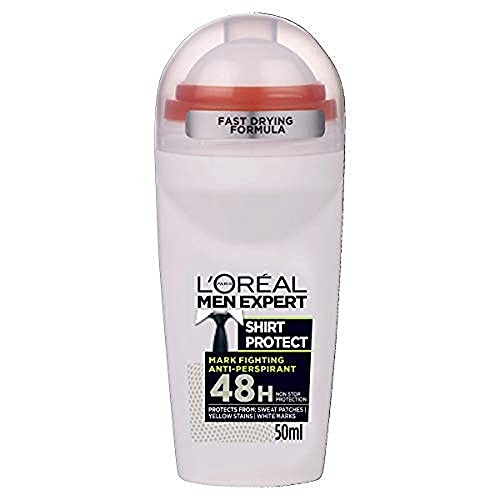 Designed to control perspiration and odor while respecting the body’s natural process, Clarins’ long-lasting formula contains refreshing extracts of orange, lemon and grapefruit, which sounds like a sweet-smelling combo to us.

It’s not just what you put in your body you should be questioning, but what you put on it too. If you’re already in the cult of clean eating and looking for a way to go au naturel in the bathroom, these are the products you need in your cabinet.

One of the leading names in natural skincare, British brand Bulldog’s products are surprisingly affordable considering their quality. Loaded with eight essential oils and free of chemical nasties like parabens and sulphates, its Original Deodorant roll-on is the dog’s, you know. Fortified with acai fruit oil and an invigorating blend of peppermint and lime, ManCave’s alcohol-free and vegan-friendly stick is a solid all-rounder for natural heads and regular blokes alike. With refreshing natural eucalyptus extract, known for its antiseptic, antibacterial, anti-inflammatory and analgesic properties, this stuff from family-owned cosmetics firm Malin & Goetz will keep you dry and smelling good without clogging your pores. Arguably, at no time is superior stink protection needed more than when you’re purposefully working up a sweat. The requirements for a good fragrance in your pre- or post-gym grooming routine are twofold: it can’t be too pungent, plus it has to keep functioning when the welcomed workout sweat kicks in.

Right Guard is a solid bet when it comes to sorting sweaty pits. It’s Total Defense 5 formulation uses heat-activated technology that adapts to your level of activity. In other words, the harder you hit it, the more fragrance molecules it releases. Nivea Men’s Sport antiperspirant is specifically formulated for blokes with active lifestyles. If you’re looking for something to keep your underarms under control, no matter how intense your five-a-side game gets, this is the stuff you need. Motion-activated anything was once the preserve of sci-fi films, but now you can get it in an antiperspirant. Sure Active Dry keeps you, well, dry when you’re, err, active, making it perfect for stowing in your sports bag. Best For The Bathroom Shelf

It goes on your armpits. It smells good. So far so deodorant. However, the interior design enthusiasts and neat freaks among you could break out in a sweat at some of the sportier options on this list. Luckily there are a few deos out there that look just as appealing as they smell.

Even the most handsome of scented candles can’t hold a flame to Australian brand Aesop’s apothecary aesthetic. That, coupled with the fact you can skip the aftershave altogether thanks to its heady blend of thyme and vetiver root, is surely reason enough to loosen the purse strings. If the thought of paying more for a deodorant than a round of drinks makes you clench your butt cheeks a little, look away now. If not, get a noseful of Acqua Di Parma’s spray, which packs a scent that has been considered a classic for more than a decade. A reinvention of Tom Ford’s classic eau de cologne, the Neroli Portofino deodorant stick features crisp citrus oils, surprising floral notes and amber undertones. Not only will it leave you smelling great, it lets anyone who uses your bathroom know you’re a man of taste. For when you need to call in the big guns, there’s no shame in turning to a clinical strength solution. Excessive sweating (also known as hyperhidrosis) affects around 367m people worldwide, but there are ways of turning off the leaky tap controlling the flow.

Driclor uses aluminum chloride to block the glands, so sweat is reabsorbed back into the body, making Super Soaker pit stains a thing of the past. Now, once again, raise your hands in the air like you just don’t care. Odaban doesn’t stop the sweat glands from working; it re-routes perspiration to the body’s blood capillaries, allowing it to be transported to areas of the skin where it can evaporate quicker. Genius. Known for its strong odor-fighting qualities, Mitchum has been helping excessive sweaters all over the world since the 1970s. Now, with its most advanced formula ever, it promises to keep even the clammiest of arm cavities bone dry.