Your No-Nonsense Guide to Choosing the Right Beard Style

The popularity of beards has waxed (the mid 19th century) and waned (the 1950s), and for the past decade or so has been on the definite upswing. Maybe you’ve tried growing one out yourself. Maybe you did it willy nilly, deciding on your beard’s length/style as you went along. Or, perhaps you took a more intentional approach and looked up the copious advice out there on which beard type was right for you.

And that’s likely when the trouble started.

Because most of the guides out there on men’s beard styles are terrible.

There are those which highlight categories like the “corporate beard” and the “short beard” as separate beard styles . . . but when you look at them, they look exactly the same.

Or, these guides will give beard styles weird names that often just seem made up. If I were to go to a barber and say, “I want the ‘Garibaldi’ beard style,” would that mean anything to him, or would he just look at me like a weirdo?

To cut through all this noise, I asked an actual barber — Thad Forrester, owner of Hudson / Hawk Barber & Shop — for his take on the advice that currently inhabits this space on the interwebs. Thad said:

The guys who write those beard style articles have been playing too much Red Dead Redemption. While beard styles have names in cowboy video games, 99% of barbers would have no clue what you mean if you asked for a ‘Garibaldi’ beard.

Fortunately, Thad followed up this critical appraisal with tips on how to do just that.

Below, he helps lay down a no-nonsense guide to picking the best beard style for your face. No silly names included.

The Prerequisite: Grow Your Beard Out For a Month (Minimum)

Before deciding what beard style you’d like, you need to grow your beard out to see what you’re working with. Thad recommends letting things grow out for at least a month:

After a few weeks, you can tell what sort of beard a man will be able to grow just by looking at the density of the hair on the face and the hair texture on the face. Some guys will have really thick, full beards, and other guys will have more patchy beards like mine. The thickness of your beard growth will be a big factor in determining what beard styles are open to you.

Make sure to check out our in-depth guide on how to grow a beard.

How to Pick a Beard Style That’s Right For You

After you’ve grown your beard out for a month, then you can start thinking about beard styles.

When he’s consulting with a client on how to style his beard, Thad steers him to a style that will compliment: 1) the way his facial hair grows in, and 2) the shape of his head.

As Thad explains: “If a guy tries to grow a beard that looks good on a celebrity but wouldn’t compliment their own face and facial hair, they’re just going to look silly. You’ve got to work with what you got.”

If your beard is thick, you’ve got more styling options. If your facial hair grows in nice and thick, you’re going to have multiple choices on how to style it. “When you have a thick beard, you’ll be able to pick a style that’s closely cropped to your face or grown out,” Thad said. 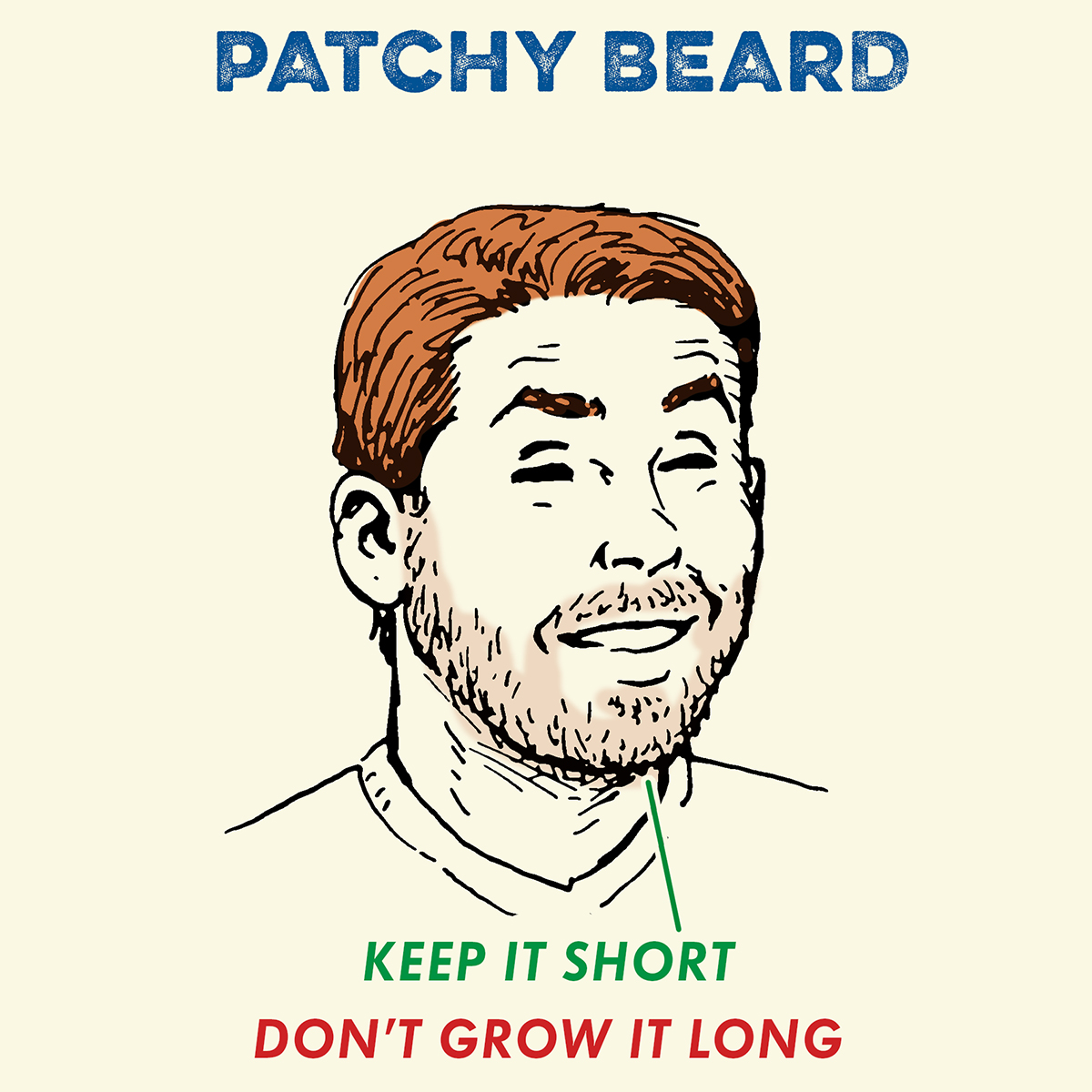 If your beard is patchy, keep your beard short. “If mother nature has endowed you with a patchy, sparse beard, your options are going to be limited on beard styles,” Thad said. “If you try to grow a long beard, it’s just going to look stringy and unkempt.”

This doesn’t mean you can’t have any facial hair. For a guy with patchy facial hair, Thad recommends sticking to stubble or closely cropped beards. But keep things cropped along your natural facial hairline.

Thad has noticed that many guys with patchy beards go for the chin strap beard style that was popular in the late 90s. “Because guys with patchy beards have a hard time growing facial hair on their cheeks, they’ll just keep their cheeks clean-shaven, but let their beard grow along their chin,” Thad explained. “It’s a pretty dated style and has been declining in popularity for the past few decades or so. I never thought it was a good look even when it was popular twenty years ago.”

If the only way you can keep your beard trimmed to your natural facial hairline is to do a chin strap beard, having a beard at all may not be for you.

Alas, here we have the so-called “Matthew effect” in action: to he who has more beard, more beard will be given, but from he who has little beard, even that which he has will be taken away.

Criteria #2 for Selecting a Beard Style: Consider the Shape of Your Face 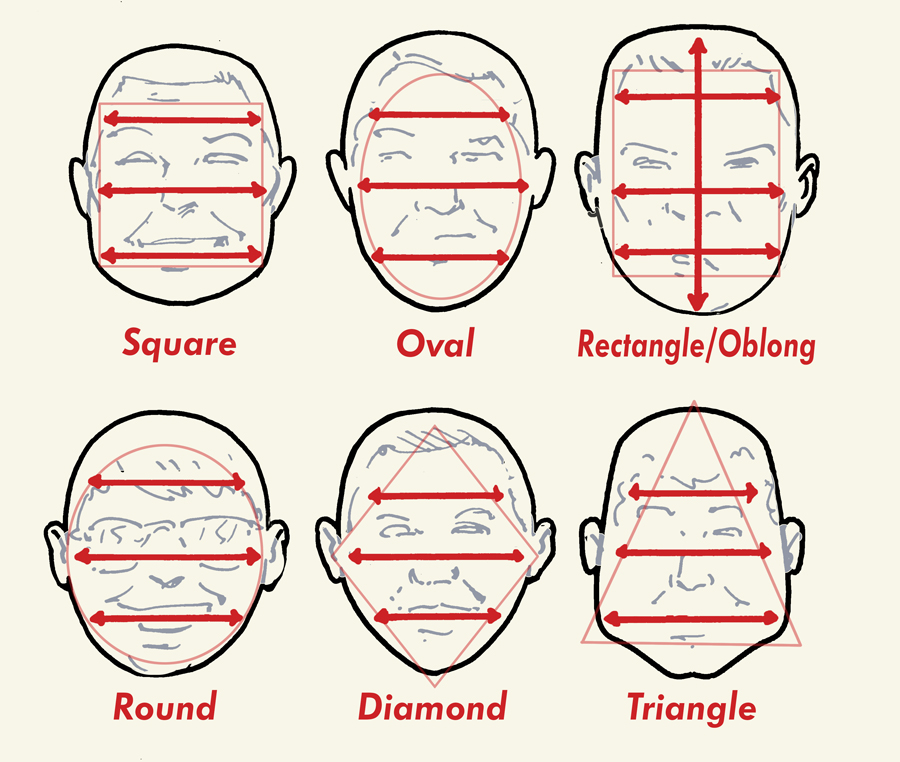 Click here for details on how to figure out your face shape.

After looking at whether you have patchy or full facial hair, Thad recommends looking at your face shape when determining your beard style. “The goal is to make your head look as oval as possible.” In aiming at an oval shape, you increase your head’s overall symmetry and proportionality.

This means you need to consider how long your beard goes below your chin and how wide it grows out from your face. “Some face shapes will look better with a beard that grows long beneath the chin but is kept cropped, so it doesn’t grow out wide. Or you may have a face shape [where the beard] would look better shorter and closer to the chin, but grown out a bit wider to give your face width,” Thad told me.

When choosing a beard style, you also need to consider your hairstyle. As Thad explained in our article about choosing the best haircut for your face shape, “If you have a long rectangle face, having a haircut with height plus a long beard is going to make your head look even longer, like Beaker from the Muppets. You don’t want that.”

Below we get into the specifics of what types of beard styles go best with different types of face shapes; they’re described in simple terms — short/wide/long — that you should be able to readily understand yourself, and communicate with your barber if needs be.

Oval Face. If you have an oval face, your beard options are limitless. “Short beards, long beards, full beads. All look good on a man with an oval face,” Thad says. 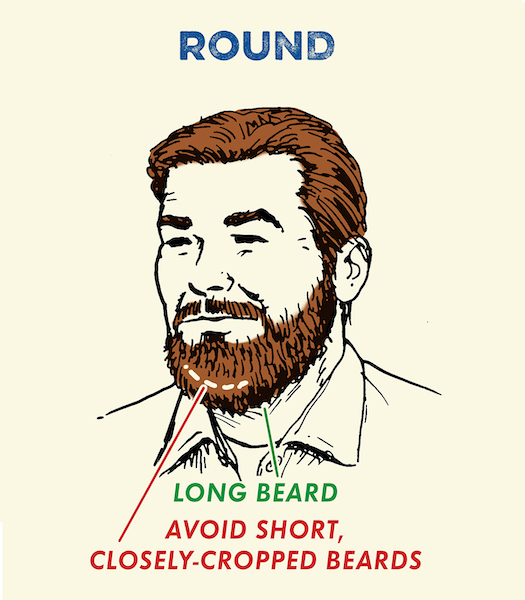 Round Face. If you have a round-shaped face, you want to pick a beard and hairstyle that will give some length to your face. A longer beard will do just the trick. “Avoid really short beards or stubble if you have a round face,” Thad advises. “It just highlights the fact that you don’t have a chin.” 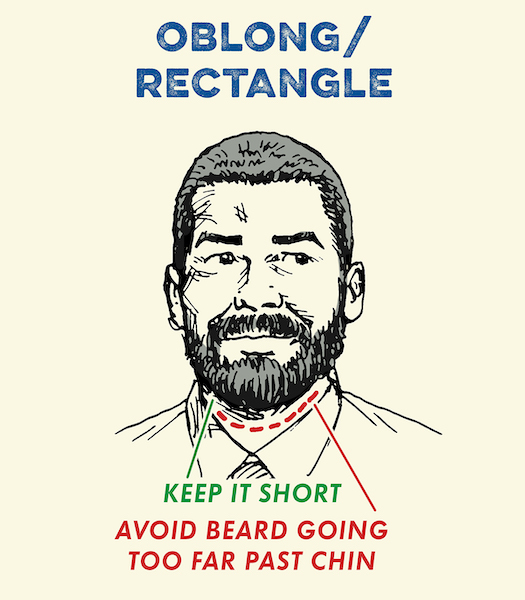 Oblong/Rectangle Face. “With a rectangle face, you’ve got to be careful with a few things because the face is longer than it is wide,” Thad says. “You want to avoid hairstyles and beard styles that make your head look longer and skinnier” — i.e., the Beaker effect.

To that end, Thad recommends that those with rectangular faces choose shorter beards. Don’t let it go too far below your chin.

If you have a really thick full beard, feel free to let your beard grow out (not in terms of vertical length, but literally out); the thickness will give some needed width to your face and make it look more oval. 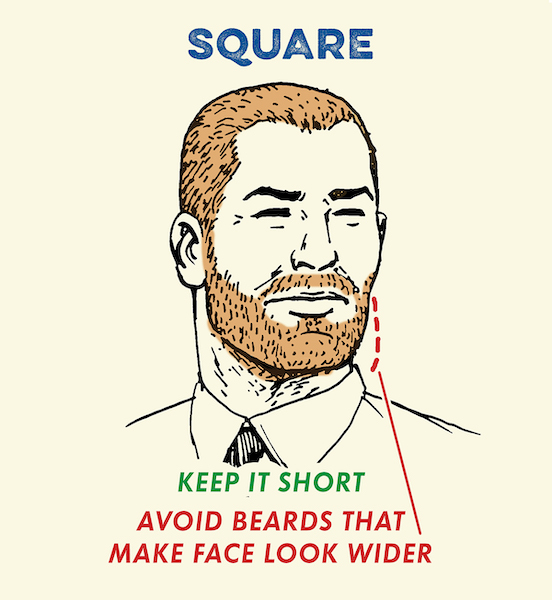 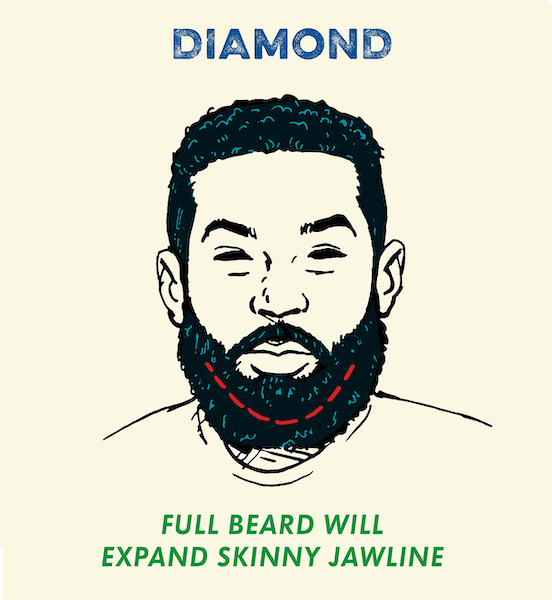 Triangle Face. Triangular faces start with a wide jawline, narrow a bit at the cheekbones, and then narrow even more at the forehead. Thad recommends that men with triangle-shaped faces avoid beards altogether. “A beard will just make your already wide jaw look wider and make your forehead look even more narrow and pointy,” he says. If you want facial hair, just go with some stubble.

If You Want a Fancy Beard, Show Your Barber a Picture of What You Want

With the guidelines above, you’ll be able to pick a beard style that will look good on you. As with most things in life, you can never go wrong with keeping it simple.

But if you’re not satisfied with a simple beard style and want something fancy that you’ve seen on the internet, Thad recommends just showing your barber a picture of what you’re going for:

Most barbers have no clue what a French Fork or Verdi is, so just show them a picture of it. And if they’re a good barber, they’ll let you know if that style would even look good on you.

There you go. How to pick the best beard style for you. Save the weird names for Red Dead Redemption, which, by the way, is a dang cool game.

Thanks to Thad from Hudson / Hawk Barber & Shop (locations in Springfield, Columbia, and Kansas City, MO, and Bentonville, AR) for his tips.

13 Sunscreens That’ll Stop You Looking Like A Raisin
8 Brands Making A Vegan Grooming Routine Easier Than Ever
14 All-Time Classic Men’s Summer Fragrances
The ‘Miracle’ Skincare Routine Every Man Should Learn
How To Get Chris Evans’ Glorious Beard
The Best Shampoo For Every Hair Type
The Complete Acne Guide That Will Clear Your Skin
15 Exfoliators To Scrub Yourself Handsome
Concealer: The Secret Grooming Tool Every Man Needs
9 Autumn Fragrances That Will Make You Smell As Good As You Look
The Best Short Beard Styles For Every Face Shape
The Best Goatee Beard Styles To Try
How to Get Rid of Chest Acne Once and for All
How To Get Rid Of Ingrown Hairs: The Expert Guide
The Skincare Product That Makes The Biggest Difference To Your Appearance
These Must-Have Skincare Products Are Handsomely Discounted Right Now
15 Conditioners That Hold The Secret To Good Hair
The FashionBeans Grooming Awards 2021
9 Men’s Fragrances To Wear All Winter Long
These Are Beard Oils Your Facial Hair Deserves