We now know just a little bit more about the forthcoming spiritual successor to the original Defender. No, it’s not going to be a Land Rover. Here is the INEOS Grenadier, the rugged, capable 4×4 SUV so many of us crave.

INEOS is a massive petrochemical company. Last year, it announced that it would launch what looked to be a very cool SUV, the Grenadier 4×4. But the British company didn’t mention many details about this, its first vehicle. Now, we know a little more, and we already want one!

INEOS revealed the exterior of both an SUV and a double-cab truck on Tuesday. The brand didn’t show or talk much more about them. However, we can ascertain quite a lot.

The brand shows a real-life version of the wagon variant of the Grenadier in videos. But in still images, the brand only released digital renderings for us to ogle. INEOS stated that the Grenadier is still slated to go into production in late 2021. We really hope this isn’t just vaporware, as so many have alluded to over the years.

German company Magna Steyr — which built the Pinzgauer and original G-Wagon — is engineering the Grenadier. And it knows a thing or two about rugged, durable, and extremely capable off-road-focused machines. Grenadier prototype testing is already underway, and INEOS plans to accumulate 1.1 million test miles over the coming year.

“Showing the design now allows us to focus on the critical next phase of the vehicle’s development, testing its capability and durability,” said Dirk Heilmann, INEOS Automotive’s CEO. “We have a very challenging program ahead, as we put prototypes through their paces in all conditions, on the way to accumulating some 1.8 million test kilometers over the coming year. From today the covers are off. Testing ‘in plain sight’ without the need for camouflage wrapping, foam blocks, or fake panels is an added benefit.”

Let’s dig into the final vehicle design that was just revealed. The design language combines elements from nearly all our favorite classic 4x4s. And it isn’t just a direct Defender knockoff, as many expected.

The Grenadier is an obvious nod to the almighty Defender. You can see its influence in the safari roof, slab sides, exposed door hinges, flat grille, vertical windshield, and round taillights. So many other iconic 4x4s are also represented in the Grenadier’s design, however.

You can see the Jeep Wrangler in the bumpers and rearview mirror designs. The hood shape and how it meets the front of the vehicle is highly reminiscent of the Toyota 40-Series Land Cruiser. The shoulders of the vehicle, along with the side rub-rails, are very Mercedes G-Wagon. There is no doubt that INEOS took inspiration from the icons that came before the Grenadier.

The Grenadier looks to be fitted with an aggressive 33-inch BFGoodrich tire mounted on classic-looking steel wheels. The rear barn doors have a spare tire and ladder. Dual exhausts look sporty and are tucked up high to provide optimal clearance and departure angle.

During this exterior reveal, we also learned that a double-cab truck will come soon after the wagon version hits the market. There isn’t a whole lot to talk about with the truck rendering. It looks like INEOS chopped the rear greenhouse off the SUV — and that’s about it. It’s not very nuanced, but it is very reminiscent of the original Defender pickups. 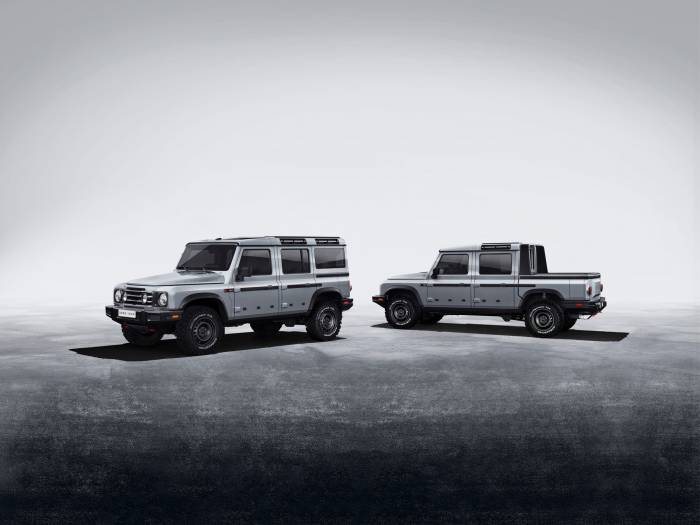 What We Know About the Grenadier

While we don’t know a ton of new info from the exterior reveal, we do know a bit about the truck (which we covered in our previous reporting). Expect body-on-frame construction, solid axles, permanent four-wheel drive with a selectable low-range transfer case, locking differentials, and a vehicle that meets all-new safety and emissions standards. We also know that there will be two engine options, a six-cylinder diesel, and a gas twin-turbo 3L straight-six, both from BMW and both backed by an automatic transmission.

“The brief was simple. We set out to design a modern, functional, and highly capable 4×4 vehicle with utility at its core,” said Toby Ecuyer, Head of Design. “A design that is ‘easy-to-read,’ with no ambiguity about the Grenadier’s role in life. There to do everything you need, and nothing you don’t. Nothing is for show. Modern engineering and production techniques ensure the Grenadier is highly capable, but we have been able to stay true to the essence of creating a utilitarian vehicle that will stand the test of time”.

This vehicle is the dream of billionaire Sir Jim Ratcliffe, Chairman of INEOS, a company that had over $61 billion in sales in 2019. He saw a market opportunity that Land Rover was missing with the new Defender. And he seized this moment in history to create his own story.

Will the INEOS Grenadier go down in history as an instant classic? Ratcliffe hopes so and hopes to spread this utilitarian 4×4 around the globe. He also strives to bring mass automotive manufacturing back to England.

“The Grenadier project started by identifying a gap in the market, abandoned by a number of manufacturers, for a utilitarian off-road vehicle,” Ratcliffe said. “This gave us our engineering blueprint for a capable, durable, and reliable 4×4 built to handle the world’s harshest environments. But it had to look the part as well.” 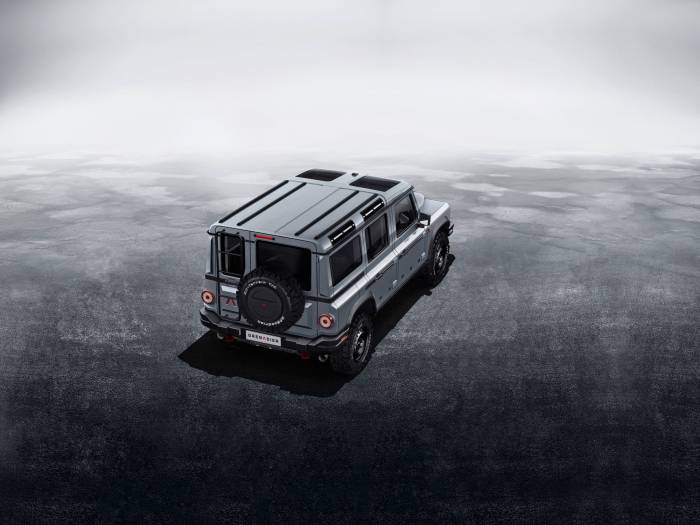 A Modern Classic 4×4 SUV Is on the Horizon

Sadly, we don’t know much of anything about pricing and availability. We can only hope for the best at this point and wait patiently to get behind the wheel for ourselves.

Follow the INEOS Grenadier as it comes to life over at www.ineosgrenadier.com. Fingers crossed it makes it to production — and also that we see it on the roads on this side of the pond. 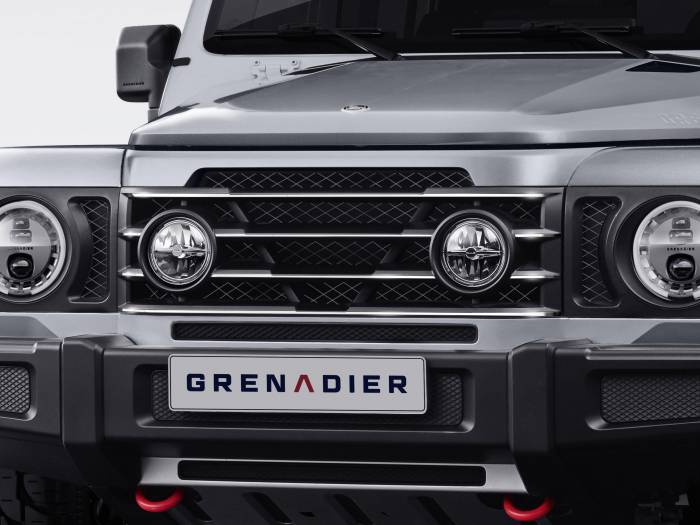