The RetroBeat: Sonic the Hedgehog 2 shines on Switch thanks to Sega Ages

If you’re like me, you were probably in the mood to play some classic Sonic the Hedgehog games after checking out his recent movie. It’s convenient that Sega Ages as just released a fantastic version of one the best games in the series.

Sega Ages is the name of the studio’s retro brand. Under this label, Sega has been releasing ports and collections of its classics since the Saturn days. Recently, Sega Ages has been focusing its efforts on Switch. This has lead to fantastic ports of retro Sega hits like Phantasy Star, Out Run, and the original Sonic the Hedgehog.

The latest wave of Sega Ages releases for Switch include Sonic the Hedgehog 2 and Puyo Puyo 2 (maybe I’ll get to that one another time). Now, I’ve loved Sonic the Hedgehog 2 since it debuted back in 1992 for the Genesis. I’ve played through it countless times, including ports on all kind of systems. This includes on the recent Sega Genesis Mini.

I’ve even already played it on the Switch, via the Sega Genesis Collection, which include a good port of the original with few bells or whistles. This Sega Ages version is the better way to play the game.

Above: One of the best stages in any game.

First off, this Sega Ages port plays great. Sonic 2 looks and feels as clean and smooth as it does in my childhood memories. You also have the extra options you’d expect from a retro port these days, things like save states and screen filters (be sure to turn the CRT TV filter on for a second, chuckle, and then immediately turn it off forever).

But this version of Sonic 2 comes with some nice bonuses. First, you can use the Drop Dash ability introduced in Sonic Mania. This move lets you start a Spin Dash straight after jumping. It speeds up gameplay a lot, as you don’t need to spend time charging up a Speed Dash on the ground. I’m usually a purist when it comes to port, but I had a lot of fun playing through Sonic 2 with the Drop Dash. And if you really think it’s sacrilegious to use it, you can turn the move off. 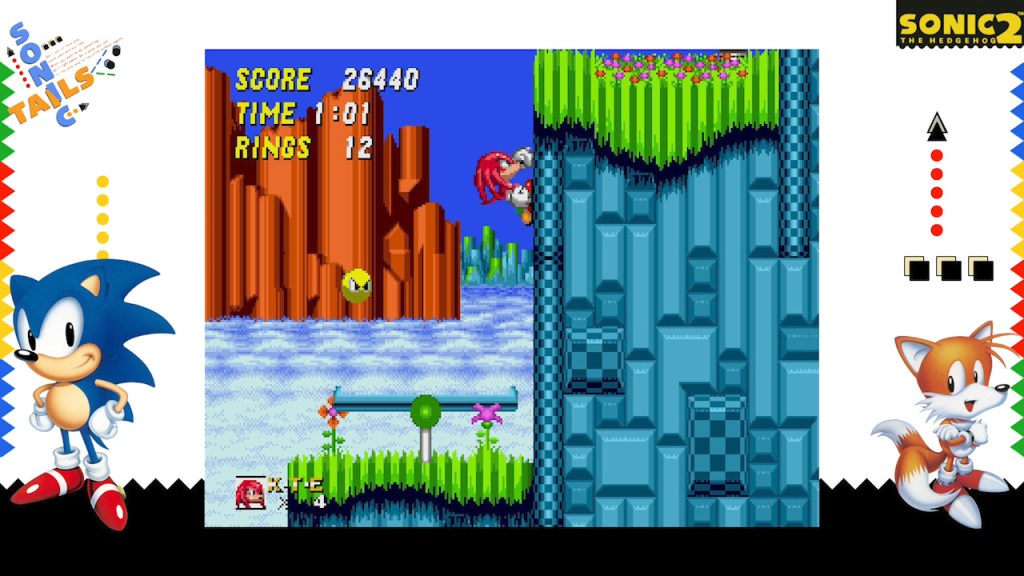 You can also play through the game as Knuckles. This is a feature that used to require locking in the Sonic the Hedgehog 2 cartridge onto the Sonic & Knuckles cart on your Sega Genesis. Many Genesis compilations, including the one for Switch, don’t include any version of Sonic & Knuckles. That means you can’t play as Knuckles in Sonic 2. But this Sega Ages version thankfully gives you access to the character.

It also includes online leaderboards and a mode that lets you play as Super Sonic throughout the entire game (normally, you have to spend a lot of time and effort unlocking this invincible version of Sonic).

All together, this may be the definitive version of Sonic 2, and it’s certainly the best way to play this classic on a portable system. I hope Sega Ages keeps going, because now I’m ready for Sonic 3 and Sonic CD to be on my Switch.

The RetroBeat is a weekly column that looks at gaming’s past, diving into classics, new retro titles, or looking at how old favorites — and their design techniques — inspire today’s market and experiences. If you have any retro-themed projects or scoops you’d like to send my way, please contact me.